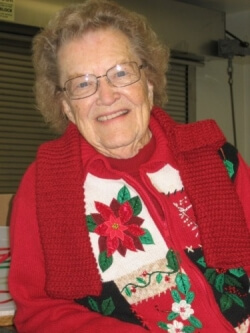 Alice Catherwood was born October 10, 1915, to Gustav and Vendla (Fransson) Larson in their home in Minneapolis. She weighed a mere 3 lbs +, and won the struggle for life as she slept on the oven door. Her twin did not survive. At age 20, on her birthday, Alice went to work for Sears Roebuck & Co. where she worked faithfully for the next 50 years. She was noted as “One of Sears Best” on the engraved typewriter she was awarded. On February 4th, 1956, Alice married Roy Halvorson, after a brief but wonderful courtship. They were married 12 years, before Roy died unexpectedly. Alice poured her life into starting the Girls Club at Bethesda Free Church, where she also taught Sunday School for many years. She and her friends, fondly called the “UB” club, spent many precious times together working at the church, going on road trips, and generally embracing life with joy and humor while serving Jesus faithfully. On December 6th, 1986, Alice was united in marriage to Stan Catherwood, brother of her good friend, Ruth. Together they enjoyed traveling back and forth between Minnesota and California, keeping close ties with family in both locations. Frequenting ball games, birthday parties, and many other family gatherings, Stan and Alice relished their time with the grandchildren, great-grandchildren as well as Alice’s many nephews, nieces, great-nephews, great-nieces, and great-great nieces. Alice will be fondly remembered as a deeply caring woman, who was always thoughtful and attentive to details that touched many lives. Her keen sense of humor, mixed with her sentimental stories, will long live on as legacy to her family and friends.