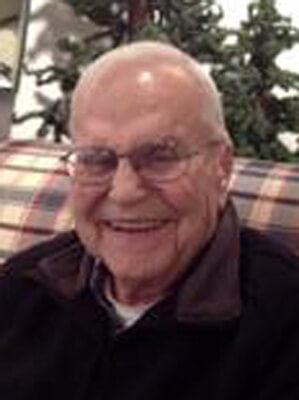 Allan was born in Drake, ND, the son of Felix and Leona (Buri) Semrau on January 16, 1934. His early years were spent living in Balfour and Kenmare, ND. In 1947 he moved with his parents to Williston. In 1948 he travelled to Valley Forge, PA where is participated in the Boy Scouts National Jamboree as a Life Scout. He was an athlete at Williston High School where he played football and basketball. In the summertime, he enjoyed playing American Legion Baseball. Allan graduated from Williston High School in 1951 and he began his career in the auto parts industry at United Auto Parts.

In 1954, while attending First Baptist Church, Allan met the love of his life, Mayvajean (Jean) Ruth Johnson. Together, they sang in the church choir, which was directed by Allan’s father, Felix. On May, 17th, 1958, Allan and Jean were united in marriage, and together raised three children in Williston. He and Jean were longtime active members of First Baptist.

In his later years, Allan became a member of Our Redeemers Lutheran Church. He retired from Murphy Motors, as their Auto Parts Manager. Also, in the 1960’s and 70’s he was a United States Postal Clerk. Allan served in the United States Army as a Staff Sergeant during the Berlin Air Crisis and in the North Dakota National Guard. He was a member of the American Legion, Edgar M. Boyd Post 37 and served on the Color Guard of the Williston Cowboys Drum & Bugle Corps. He was a sports fan of the Minnesota Twins, Vikings and Wild. He also loved auto racing, especially NASCAR. He enjoyed spending time with his family and friends. He and Jean loved taking trips to the Twin Cities to see their children and grandchildren. Allan and Jean were married for fifty-five years. After Jean passed away in 2014, Allan decided to move to be near his children in Bloomington, MN where he enjoyed living at Nine Mile Creek Senior Living.

Allan is survived by his children, Larry (Trudy) Semrau and their daughters, Lindsey and Lexie; Laurie (David) Skinner and their sons, Calvin and Daniel; Kevin Semrau and his son and daughter, Taylor and McKenzie, all from Bloomington, MN; sister, Flora Egbers, Mount Vernon, WA.

He is preceded in death by his parents, Felix and Leona; wife, Jean; and his sister, Carol Faye Cook.

All services will be held in Williston, North Dakota.
Visitation: Friends may call at the Fulkerson Stevenson Funeral Home on Monday, December 21, 2020 from 3:00 PM until 7:00 PM and at the church on Tuesday one hour prior to the services.
Service: His funeral service will be held at 11:00 AM, Tuesday, December 22, 2020 at Our Redeemer’s Lutheran Church in Williston. Pastor Steve Lundblom will officiate.
Graveside Service: Interment with military rites will be held at Hillside Memory Gardens, Williston.
Due to Covid 19, we ask that everyone adheres to local and state requirements for social distancing.

In lieu of flowers, memorials preferred to Our Redeemer’s Lutheran Church and CHI Hospice.