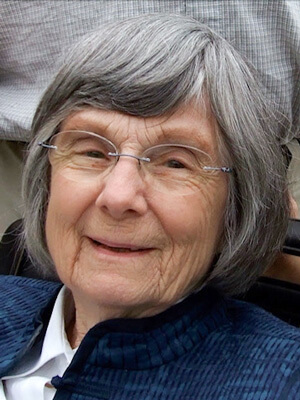 Barbara Anne Mattill died at age 90 on August 9, 2020 at New Perspective Senior Living in Minnetonka. Barbara was born on April 23, 1930. She grew up with three sisters in Glen Lake, Minnesota, on the grounds of the Glen Lake Sanatorium where her father was a physician. She had strong opinions from an early age, among them the love of cats and a clear preference for the color blue. She graduated from Hopkins High School in 1948, and from the University of Minnesota in 1952 having spent two years at St. Olaf College. She taught third grade for two years and then for two years she was a librarian in the laboratory school at UMD. She received a Masters' Degree in Library Science from the University of Minnesota and began her long career with the Minneapolis Public Schools as high school librarian at Edison High School. She found a perfect spot for a summer retreat on Lake Roosevelt near Outing in northern Minnesota where she regularly fed the deer and chipmunks and bought dog food for the raccoons. She delighted at being at the lake for as long as she was able, and she happily entertained family and friends. At one point she took up archery, and she included a hunting bow among her prized possessions. Health concerns arose but did not restrict her enjoyment of retirement. She was a talented knitter and a great cook; she collected cookbooks with literary connections. Ever the librarian, she always had a world atlas and World Almanac close at hand. Her last three years were
spent in a care facility. Special thanks to Bev, the Brookdale Hospice nurse, for exceptional attention. Barbara was preceded in death by her parents, Dr. P.M. and Nora (Nelson) Mattill, her sisters, Mary Holum and Kathryn Strom, her brother-in-law, Herbert Strom, and her niece Elizabeth Johnson. She is survived by her sister, Phyllis Mattill; her brother-in-law, John Holum; her nieces, Ann Holum (Alex Kass) and Kathryn Holum (Glenn Baron); her nephews David Strom (Katja Heide), Timothy Strom (Pamela), and Jonathan Strom (Siri Olson); Daniel Johnson (May); and eleven grand-nieces and nephews.

A memorial service will be announced when it is safe to gather.

Memorials are suggested to UNICEF and the Animal Humane Society.