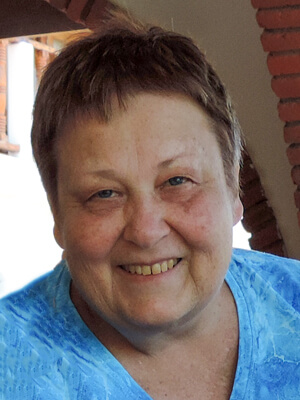 Barbara Allen Schulz of Apple Valley was born in Minneapolis on January 28th, 1951 to Doug and Betty Hansen. On February 11th, 2021, one week after celebrating her 70th birthday, she was welcomed home in heaven by her Lord and Savior. Barb graduated from Edina High School in 1969. The summer after high school, Barb started working at Bachman's where she met Rolf Schulz, she was smitten by his sandy blonde hair, smile and muscles. They were married on October 16th, 1971 and moved to Silver Bay MN where all four of their children were born. Barb was a devoted mom and her children kept her very busy! After Reserve Mining closed in 1986, they moved to Longmont, CO. Two years later they moved back to MN. Church was important to the Schulz family and shortly after moving to Apple Valley they became members at Shepherd of the Valley Lutheran Church (SOTV). Barb was involved with many activities at SOTV and eventually found her calling and joined the staff as an administrative assistant for Youth Ministry. In her 19 years working at SOTV, she had a powerful impact on the youth going through confirmation, the youth directors, and even the pastors. She was truly a light! In 2012 Barb was diagnosed with Multiple Myeloma which later led to Myelodysplastic Syndrome and Acute Myeloid Leukemia. She retired from SOTV when her health issues began interfering with her work, but she continued to volunteer at the Welcome Desk when she could on Confirmation nights. Barb did not let cancer stop her from enjoying life and creating new memories with family. She lived by motto on the back of her Bubba Backer's T-Shirt - "Falling down is part of life-getting back up again is living." She was able to make a trip to Costa Rica with the whole family, including her mom and her sister. She also enjoyed a three-week trip to Norway where she was able to meet some family and see the tiny island in the Norwegian Sea where her great grandfather was born. Other memorable trips included Mexico, Arizona, Puerto Rico and the annual family week at the cabin. It was important to Barb that her grandkids know about Jesus. One recent Christmas she wrote and had the grown-ups in the family perform a Christmas Nativity Pageant for them. Barb and Rolf also took the youngest grandkids to a family Bible camp in the Black Hills where they al grew in their Faith. On one of her last days she spent a few minutes with each of her six grandkids one-on-one to encourage them to let their light shine. Barb enjoyed spending time with Rolf outside and this past summer they were able to ride more than 500 miles on their side-by-side power assisted tandem bike. After nine years of battling cancer, Barb spent her final days at home surrounded by family and friends. Barb is survived by her husband of 49 years, Rolf; children, Eric (Amy J) Schulz; Amy Mae Schulz; Marne (Tyson) Donnelly; Carrie (Jason) Erickson; grandchildren, Cameron and Kendall Schulz; Brayden and Blake Donnelly; Mikko and Jacob Erickson; and sister Nancy (Fred) Sunder. Barb was preceded in death by her parents, Doug and Betty (Gilbert) Hansen.

There will be a private family interment in February. Details for a Funeral Service for ALL to attend will be announced at a later date and the family hopes that you will join them in celebrating Barb's life.

Memorials may be given to Shepherd of the Valley Children, Youth & Family Ministry or University of Minnesota Foundation MOTM (Marrow on the Move) Research Fund.