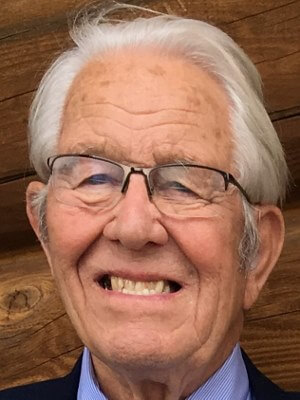 On Saturday, January 30th, 2021, Christian Benjamin Vatsaas was called home, just 26 days shy of his 93rd birthday. The world has lost a great yet humble example of a godly son, brother, husband, father, and friend.

Christian was born in Shanghai on February 25, 1928 to Kristian and Sigrid Vatsaas, Norwegian missionaries to China. The family lived in the central city of Xian, until his father died in 1932. At age 5 he relocated to Norway with his mother and three siblings. They purchased a home in the small town of Fjellstrand, overlooking the Oslofjord.

Christian’s boyhood in Norway was filled with happy memories, but carefree youth was interrupted by the invasion of the German army in 1940. His family secretly provided overnight lodging to people escaping to Sweden. Radios were banned by the Nazis, but Chris used a nail, wire, and a razor blade to make a crystal radio. The parts were dismantled and hidden after each use.

At age 15, Chris took a factory job making marine radios. He bicycled to Oslo, over 25 miles each way over unpaved roads. His bicycle had no tires, due to a wartime rubber shortage, so he fashioned substitutes out of a garden hose stuffed with grass, fastened to the rims with bailing wire. This was one of many ingenious innovations that Christian crafted over his lifetime to transform the materials he had on hand into whatever solution he needed to create.

In 1947, Christian’s family immigrated to America, sponsored by cousins who farmed in Gonvik, near Thief River Falls. After a time in Gonvik, Chris’ family moved to Minneapolis.

In 1950, Chris worked as a carpenter apprentice on a construction crew. When he drove the first stake into the ground to mark the corner of a new church on 52nd and Chicago, he didn’t know that his wedding would be held there in 1955.

In November 1050, Chris was drafted into the Army and sent to Korea. He was still learning English, but his fluency in Morse Code earned him an assignment in the US Army Signal Corp. He served in Korea for 20 months, and in the Army Reserve until 1956. Chris became a U.S. citizen in 1953. When he returned home, he and his younger sister lived with his mother, who was dying of cancer.

This brings us to the moment when Chris met and fell in love with a slender Swedish-American beauty in the basement of a small Baptist church. Marilyn Carlson had been coaxed into attending a church social by a girlfriend who wanted to catch the eye of a certain handsome Norwegian boy recently back from the war. Chris only had eyes for Marilyn, however. He was immediately captivated by Marilyn’s striking red hair, and then by her reserved charm. That was the beginning of their lifelong journey together. They were married here at First Free on June 18, 1955.

Chris and Marilyn met during a polio epidemic, and Marilyn was working as Sister Kenny Institute’s first Occupational Therapist. OT was a new field, and there was little equipment available. Chris’ ingenuity, woodworking, and fabrication skills were the perfect complement to Marilyn’s innovation and creativity. Together they designed and produced many therapeutic devices, some of which were used at Courage/Kenny until recently.

Chris attended the University of Minnesota on the GI Bill, and graduated with a teaching degree in Industrial Arts. He was a popular Industrial Arts teacher in Burnsville, MN for 33 years. He is fondly remembered by his students, many of whom still have the projects they made in his classes. When his obituary was posted on the Burnsville Alumni Facebook page, the comments flooded in, recalling Mr. Vatsaas’ kindness, patience, and love of teaching.

Chris was a skilled carpenter and woodworker. In his spare moments, he built additions on the family’s homes in Richfield and Minneapolis. He also built their beloved summer cottage on lovely Lake Francis, along with furniture, a sailboat, canoes, kayaks, a treehouse, archery bows, motorized go-carts, playhouses, dollhouses, and toy furniture. Chris and Marilyn made hundreds of handcrafted wooden, ceramic, and screen-printed Christmas decorations. These still adorn shelves and Christmas trees across America, Norway, and Sweden.

Chris and Marilyn raised four children. He was a warm, affectionate, loving, patient, dependable, happy husband and father. He had a fun sense of humor, which was clearly molded by decades of teaching junior high. Chris and Marilyn were active members at First Evangelical Free Church for all the decades since. They served faithfully and developed many cherished lifelong friendships. They brought their children to church every Sunday morning and evening, and on Wednesday night. The kids have the perfect attendance pins to prove it.

In 1970, the family took the first of many trips to Norway, to reconnect with close family there. That trip resulted in warm, lifelong relationships across several generations. Chris and Marilyn’s last trip to Norway and Sweden was in 2007 with their four children and their spouses, and 11 grandchildren. The trip’s final stop was Chris’ childhood home and a spectacular 10 pm sunset over the Oslofjord.

In 2000, Chris and Marilyn went to China on a tour sponsored by the Mission Covenant Church of Norway. Along with other descendants of the earliest missionaries from Norway to China, they visited several large, vibrant churches that were planted by Chris’ father in the early 1900’s. A tour highlight was meeting an elderly Chinese person who was able to lead them to the site where Chris’ father had been buried.

After he retired from teaching, Chris became active in the Bloomington Ham Radio Club. He loved using his ham radio to connect with people around the world, and he enjoyed his friendships with the other club members. He loved spending time with his kids, grandkids and great-grandkids. The cabin at Lake Francis was his favorite place, and he mowed the lawn and did other chores well into his 80’s. A year after his stroke in 2001, he was carrying cement blocks up the hill.

In spite of the many difficult circumstances he encountered early in his life, along with a wide variety of hospital stays over the years, Chris was an unfailing optimist who focused only on the many blessings that God had directed his way. Dad lived his faith more than he talked about it. He was a godly man who trusted God through thick and thin. 1 Corinthians 13 describes him well. “Love is patient, love is kind. It does not envy, it does not boast, it is not proud. It is not rude, it is not self-seeking, it is not easily angered, it keeps no record of wrongs. Love does not delight in evil but rejoices with the truth. It always protects, always trusts, always hopes, always perseveres. Love never fails.”

Christian is survived by wife of 65 years, Marilyn and their four children; daughter Janet Schubert (Thomas) and sons Bradley (Lynette), Richard (Cheryl), and Mark (Bethel); thirteen grandchildren, eleven great-grandchildren (plus two on the way), sisters Bergliot Ostigaard and Grace Madsen (Donald) and brother David Vatsas; and loving extended family in America, Norway, and Sweden. He was preceded in death by his parents, and by his siblings in Norway: Eivind (Dagny), Olav (Hagborg), Knut (Lillian), and Gjertrude (Olav).

The family offers special thanks to Firebird Assisted Living in Glendale, AZ, especially to his main caregiver and beloved friend, Lucatio “Jun” Lopez. We are forever grateful for the genuine love and devoted care they showered on Chris during the last three years.

Extended family and friends are invited to join via livestream at https://youtu.be/tY1mbmW485A.

Memorials preferred to:
Firebird Assisted Living
Cards sent in care of Morris Nilsen Chapel will be delivered to the family.