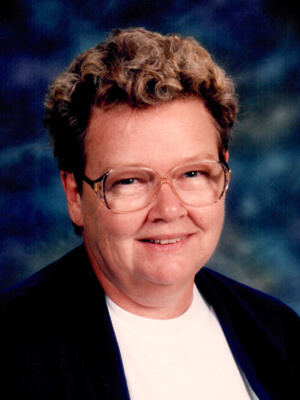 Corrine "Corky" Johnson, age 84, left us on Sunday, December 27th at her home in Richfield, Minnesota following a valiant struggle with esophageal cancer. Born February 7, 1936, in Minneapolis to Anna Lindelof Newgard, Corky was the youngest of six children and joins in rest her mother and siblings, Beatrice, Arlien, Vivian, Dolly and Ray.

She was spirited, determined and loving, with a quick wit and an even quicker smile. Headstrong and quirky, she met each challenge in life head-on, and she never backed down. Her life was ruled by her desire to care for those around her and provide them with things she "knew they couldn't live without".

Meeting Corrine at the soda fountain of a local drugstore through a mutual friend, Allan realized he had found the woman he would spend the rest of his life with.

In 1956, Corky and Allan were married and together they had five children, Sandy, Sue, Greg, Nancy, and Jon. While she had many jobs over the course of her life, mother was the one she found the most happiness in. She wanted to create a world of possibilities for her children, and dedicated herself to creating magic in the mundane. Later in life, she went to work for Lifetouch-a job which brought her joy because she was the first to see the smiling faces of her grandchildren in their school pictures. The home they built together always had room for her grandchildren, and she loved having them. Her greatest desire was always to ease the burdens of life on those around her, and give them what they needed to be happy.

Her determined spirit and courage make her stand out, and deeply touched the lives of those around her.

Cards and remembrances of the life she lead, and the people she touched along the way may be sent to the family home.