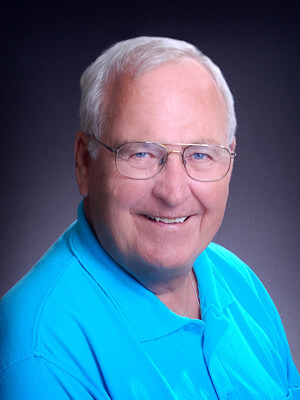 Dennis Jerome Johnson, age 81, of Bloomington, MN, passed away on March 26, 2021. Born during a New Year’s Eve snowstorm in the general store in Corvuso, Minnesota, he was raised in Atwater, Minnesota and was a proud participant of 4H and “Boy’s State Leadership”. Dennis graduated from Augsburg College in 1961 where, as a senior, he met the love of his life, Janet Batalden. They married in 1961 and after serving in the Army from 1963-1965 where their first child, Brent, was born, they returned to Minneapolis where they added daughter, Simone and son, Wade. They moved to Bloomington in 1977, where they spent the majority of their lives together.
His greatest love was his wife and the family they built together. Dennis was an amazing husband who rarely brought flowers (he brought a plant instead, it lasted longer!) and he always brought laughter. He was a father who always made time for his children and then his grandchildren. A long-time member of Diamond Lake Lutheran church, he lived his faith by loving people and lived his life by one simple guideline, “Keep on smilin’“. He loved children, played Santa for the Welcome Home program that both he and Jan volunteered at and served as a basketball coach for Jefferson traveling basketball for many years.
Starting his career in insurance, Dennis moved to real estate in 1974, ending his career with Keller Williams in 2014. His warmth was felt by so many as he mentored young Realtors throughout his career, with one of his greatest joys being to see his son, Brent, become a successful Realtor. His joy in helping people achieve their dream of buying a home was felt by literally thousands during his 40 years as a Realtor.
Dennis was a forever friend who loved to share a cup of coffee and an apple fritter and usually greeted with a hug, not a handshake - and when he hugged, he meant it. Whether by sharing lunch at the Shangri-La, a cup of coffee at McDonalds, or him "buying" lunch at a free BBQ, he greatly valued the time he spent with others. He would often say, "You can’t judge a man’s wealth by the size of his bank account, but by the number of true friends he has". He was a second father for so many throughout his years, and he will be missed and cherished by all who knew him.
Preceded in death by his mother and father, Clara and Everett, father-in-law and mother-in-law, Leonard and Cathryn, brother Donny and niece Jill.
Survived by wife Jan, children, Brent (Anne), Simone Gonzalez (Alex), and Wade (Sara), grandchildren, Jake, Karsten, Emily, Joshua, Matthew, Alexa, and Peter, in-laws, outlaws, nieces, nephews and many amazing friends.

Funeral to be held at Christ Presbyterian Church in Edina, MN, 4:00, Friday April 9th. Reservations required due to Covid restrictions. Link for reservations below.
https://docs.google.com/forms/d/e/1FAIpQLSd1VUvIivBOHU3aJC_vlpY
WeGYZuCCG7mJheQvYGlf_j10zCQ/viewform

Livestream of the service will also be provided at http://www.livestream.com/cpc

Memorials are preferred to VEAP or the charity of donor's choice.