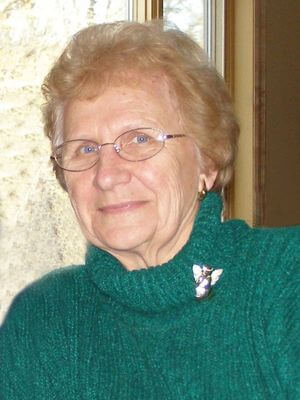 Donna L. Alstrup passed away peacefully on November 25th at the age of 91, after a short struggle with Alzheimer's Disease. She left behind her children, Debbie Shannon (David), Dan Alstrup (Kim), and Dawn Alstrup; grandchildren, Jonathan Alstrup, Zachary Mustful, and Alyssa Mustful; and sister, Elda Bunnis. Donna will also be dearly missed by many other family members and friends. She was preceded in death by her parents, Louis and Minnie Bellcour; siblings, Louis Bellcour, Eldora Knapstad, and Zane Bellcour; husband, Richard (Dick) Alstrup; and granddaughter, Kristine Alstrup.

Donna had a kind heart and always thought of others before herself. She grew up in Detroit Lakes, the youngest of five children. Because they didn't have much, she spent her childhood helping take care of the home and her family. Donna moved to Minneapolis in her mid-20's, where she met and married Dick. They stayed faithfully together until Dick's passing in 2010. She was an amazing wife and mother, always putting the needs of her family first. She also found joy in her faith and volunteering at church and school.

Donna was a strong woman, living independently in her Bloomington home until March 2022. That's when Alzheimer's reared its ugly head and caused her to decline quickly. In April, she moved to Suite Living Senior Care in Burnsville and left this world just seven months later. It's truly a blessing she didn't linger long. She would have hated all the attention she received.