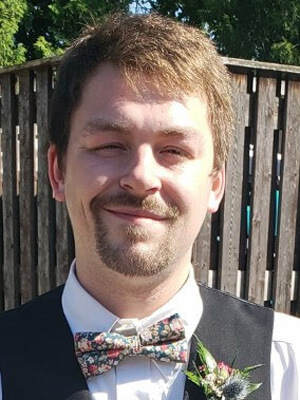 Dustin never liked to show his affection to people, but he displayed it in his own unique way. He’s the kind of guy who’d be willing to help you in the time of need and doesn’t turn his back on you. May have been a stubborn man but heart of gold who always seen the best in people. Adored animals If you didn’t see him outside on his bike, out in nature you’d find him with his buddies playing some form of **nerdy** card game, his go-to games was Magic, borderlands or Naruto.

His newfound love was cooking. He really enjoyed learning new way to cook food. Dustin’s sense of love and loyalty to his family and friends is an inspiration that should live on in all of us. Always known for his genuine straightforward personality, he was almost always willing to listen and try to learn something whether it be knowledge or a viewpoint. Never hesitant to ask an awkward question or state an obscure way to look at something.

To Describe Dustin would be a fault to his character, Dustin was his own individual he said and did what he felt meant to be done. His honest direct way his own to say “Do it the Dustin way” was not an insult but a remembrance.