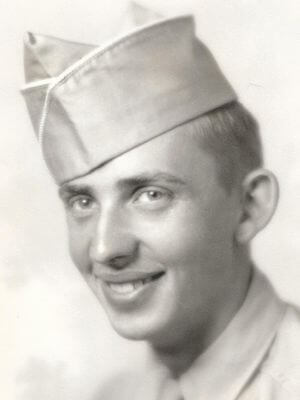 Earl Aaron Edlund, “Ben”, Age 96 of Woodbury, Minnesota passed away peacefully on Tuesday, September 20, 2022. He is survived by his loving wife of 74 years, Vivian Elaine; sister, Jean (James) Magnuson; daughter, Jolene L. (Greg) Beckwith; son, Mark E. (Deborah) Edlund; grandchildren, Aaron M. (Kelly) Edlund; Christa M. (Josh) Fangmeier; three great-grandchildren, Kellen, Kieran, and Kameron Edlund. Also survived by many loving nieces, nephews, cousins and friends. He was preceded in death by his parents, Hjalmer A. and Laura E. Edlund; brothers, Richard A. (Hazel) Edlund and Duane H. (Helen) Edlund. Earl was born on October 7, 1925 in Shotley, Minnesota. He grew up in Kelliher, Minnesota and was a 1944 graduate of Kelliher High School. Shortly after his 18th birthday, Earl was inducted into the military. A veteran of World War II, Earl served in the U. S. Army from January 1944 to January 1946. An infantryman with the 411th Infantry Regiment, 103rd Division, he served in the European Theater. His decorations include the Bronze Star, Army Commendation Medal, and Purple Heart, along with the Combat Infantryman Badge. He was a Lifetime member of the VFW and American Legion. Earl and Vivian were married in October 1948 in Kelliher. They moved to the Twin Cities in 1951. Initially Earl worked in various fields of employ, eventually working for the Edina School system for over 30 years. He was an avid reader of western novels; loved to travel; and enjoyed golfing well in to his retirement years.