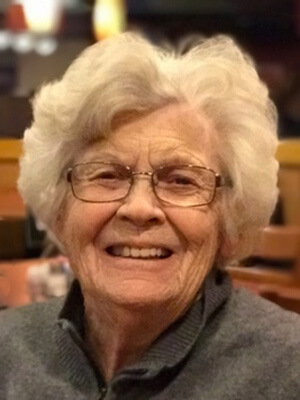 Edith J. Knudson, age 91, died June 7, 2020 in Bloomington, Minnesota. Edith was born on May 17th, 1929, Norway’s Independence Day, in rural Elbow Lake, Minnesota to Tomine (Lofthaug) and Richard Jedlund. Her parents were immigrants from Norway and Sweden and homesteaders and farmers in South Dakota and later Minnesota.

After graduating from high school, Edith worked as a bank teller in Elbow Lake and later in Minneapolis where she met Carlyn “Carl” Knudson at the boarding house where they both lived. At the time, Carl worked for Archer Daniels and attended law school at night. According to family lore, her mother picked Carl out as someone she should meet. The couple wed on June 11th, 1955, and would have been married 65 years this week.

Edith and Carl had two children and in 1960 Edith left banking to become the consummate mother, homemaker, and ultimately, travel companion. Edith was a den mother, a Brownie mom, and supervised a house where kids were always welcome and frequently fed. She was active at Woodlake Lutheran Church and volunteered at Fairview Southdale Hospital. She had many interests, but beyond nurturing her family, most loved to spend time with her friends both in Minnesota and in Norway. Edith had many first cousins in Norway whom she adored, and she and Carl visited her mother’s homeland more than 30 times.

Edith is survived by her husband, Carl; children, Kim Kilchenmann Toporek (son-in-law, Jack Toporek) and Mark and her much-loved grandson, Daniel. Edith was preceded in death by her wonderful trio of older brothers, Russell, Richard, and Harold (Jed).

Private family interment will take place at Fort Snelling National Cemetery on June 18th and a celebration of Edith’s Life will be held at Woodlake Lutheran Church on a date TBD in the Fall.

The family wishes to thank The Estates at Bloomington and Moments Hospice for the loving care which they provided to Edith during the last year of her life.