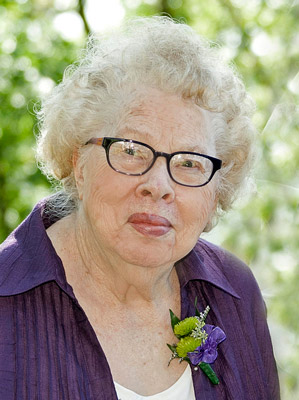 Elsie Andrea (Hougen) Cameron was born on July 10, 1924 in Fertile, MN and passed away on Saturday, April 10, 2021 at the age of 96. Elsie grew up in Crookston, MN. She was the youngest of six children, born to Emigrants Louis Hougen (Norway) and Anna Lundin Hougen (Sweden). She was the first goalie for the Crookston Womens Hockey team, drum majorette for the Drum and Bugle Corps, and piloted a small aircraft. She attended St. Cloud Teachers' College, and the University of Minnesota where she met her husband Don, who was in dental school. They were married following graduation, and Don soon left for a stint with the United States Army, where he was stationed in Zama, Japan. They were blessed with five children, four daughters and one son. They raised their family in Richfield, MN. When the children were all in school, Elsie worked beside Don and managed the dental office. The family enjoyed summers at their cabins, first in Hillman, MN and later at their beloved home on Lake Belle Taine near Park Rapids. Elsie was a community volunteer and active at Woodlake Lutheran Church - her church home for 70 years. Don and Elsie enjoyed traveling following retirement in 1985, and took several trips through Europe and Russia. They rang bells every Christmas for the Salvation Army. Don passed away suddenly in 1998. Elsie established a scholarship fund through the Richfield Rotary Club. Two scholarships have been awarded in Don's memory every year since then. Following Don's death, Elsie moved to 7500 York Senior Cooperative in Edina. She was active on the Food Service committee and the Christmas Fund committee for many years. She enjoyed singing with the Bloomingtones (a senior group in Bloomington).
Elsie had a beautiful smile, was genuine and was generous in all things and loved her children, grandchildren and great-grandchildren unconditionally. They were her life. Elsie is survived by her immediate family, many nieces and nephews, great-nieces and nephews and many friends at her home at 7500 York. Elsie's survivors include daughter, Nancy Cameron; and daughter, Janis Cameron; granddaughter, Jenna and her husband, Taylor Kohl and their children, Raynar and Stellan; son, Gregg Cameron and his wife, Mary; grandson, Scott Cameron and his wife, Stephanie and their children, Alexander, Chase and Annabelle; grandson, Brian Cameron and his wife, Lisa and their children, Kaiya, Kinsey and Jensen; daughter, Terri Cameron Leen and her husband, Vern; grandson, Michael Leen and his wife, Erika and their children, Braxtyn and Brody; granddaughter, Stacey Leen Meiser and her husband, Chris; Chris' son, Hunter Meiser Stacey and Chris' children, Preston, Madelyn and Cameron; and grandson-in-law, Cody Roush.
Preceded in death by her parents and five siblings, husband Dr. Donald S. Cameron, daughter, Tracy Cameron, granddaughter, Kelly Leen Roush, and great-grandsons, Noah Cameron and Crosby Roush.

Memorials preferred to Fairview.org/foundation Hospice or The Salvation Army.