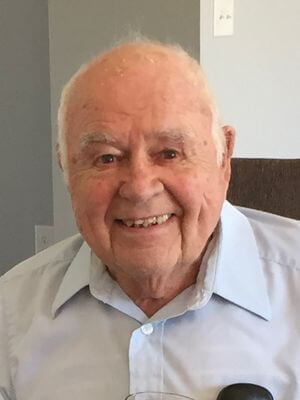 Garfield Quinten Hoversten, age 96, of Edina and formerly Richfield, MN died peacefully on January 22, 2023 at Presbyterian Homes of Bloomington. Garfield was born March 11, 1926 on the family farm outside of Lynd, MN to Elias and Martha Hoversten. He was the last surviving member of 14 children. Garfield was baptized and confirmed at Hemnes Lutheran. He graduated from Minneota High School in 1944, served in the Navy from 1944-1946. Garfield attended Augsburg College, graduating in 1950 with a degree in Chemistry and Math. He met his wife, Bernice there. They were married in 1948 and were blessed with 8 children.

He taught math at Richfield High School and Science at East Junior High, retiring in 1982. He also taught driver's education, summer school, sold tree stands and canning jars at the State Fair, and Cutco knives. He opened a DQ for the kids to earn money at 38th and Grand and formulated a company called EBBCO with his partner, Wallace Houts for real estate ventures. He went onto St. Cloud University for his Master's in Science Education and Real Estate Licensing. The family traveled extensively, visiting relatives all over the U.S. He visited Hawaii, Norway, took cruises to Alaska and China and wintered in Florida. He was a Boy Scout Commissioner, an avid photographer, a hunter, a kind, generous and wonderful Dad, Grandpa and Great-Grandpa.

As a 68-year member of Oak Grove Lutheran Church in Richfield he participated in the choir, teaching Sunday School, church council and commissions. Garfield was instrumental in getting the funds for building the Hoversten Family Chapel at Augsburg University.

The family extends a special thank you to the staff at Presbyterian Homes and Optage Hospice for their loving care.

The service video will be available at Oak Grove Lutheran Church Facebook page.