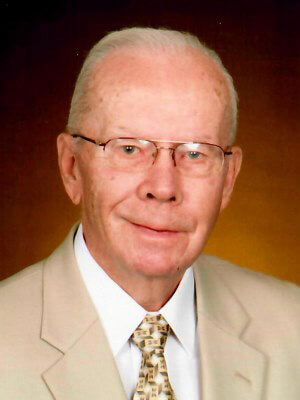 Gerald was born at home on the farm near Moorland, Iowa to Albert and Gena. He was the fifth of seven children. He went to country school through eighth grade and then to Moorland High School where he graduated. He attended several colleges: Luther, Bradley, and Augsburg, until he was drafted and spent two years in the Army, one of which was serving as a radio operator in Korea. When he returned, he married Phyllis on October 3, 1953. Together, they went back to Peoria, IL so Gerald could finish his degree in business. After graduation, and a short period of time back in Iowa working with his father on the farm, he and Phyllis moved back to Minneapolis where he worked 15 years at Honeywell and then moved on to Eaton Corporation in Eden Prairie until he retired.

Gerald had a strong faith in Jesus Christ and was an active member of Trinity Lutheran Church of Minnehaha Falls. He was an usher and taught Sunday School for many years. He also served several terms on the Church Council during which he was the treasurer. After they moved to Prior Lake they attended a church closer to where they lived but their hearts still thought of Trinity as home.

Gerald’s ability to fix anything and his spirit to help others was greatly used to serve his Lord, fill his spare time and days in retirement, and to bless those around him. After retirement he also showed his artistic side by taking up wood carving and crafting small metal sculptures.

We rejoice that he is free and with his Heavenly Father, but he will be dearly missed.