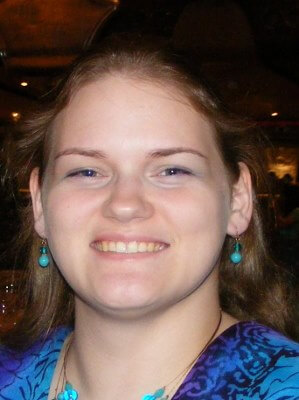 It is with great sorrow that we, her parents, announce the death of Gretchen Windschitl, 22 July 1983 - 18 August 2018. She died suddenly and unexpectedly in her condo in Saint Louis Park, MN from an intercerebral hemorrhage due to hypertension, and was found at 2:00 pm Saturday 18 August 2018 when we came to visit for a mother-daughter massage appointment that day.

Gretchen was the best of daughters, bringing more love and joy to us than we could have imagined, and the day will never pass without us remembering her, loving her and missing her. Simply put, she was FUN - there are very, VERY few people who had given her cause to dislike them, and vice-versa.

Gretchen was born in Arlington, TX practically within sight of the 'old' ballpark, which combined with her grandpa 'Poppo' Curt Mohler's deep love of baseball to make her a lifelong Texas Rangers fan. When the Rangers came to play the Twins, she rarely missed a game and proudly wore her Rangers ballcap. She also shared her mother's affection for the Dallas Cowboys football team.

Gretchen spent her first twelve years in North Texas, attending St John the Apostle school until mid-6th grade, when her dad's new job made us move to Minnesota. She finished grade school at St Helena's in Minneapolis, continued through Academy of Holy Angels high school in Richfield, and got a degree in Accounting from Minnesota School of Business.

Gretchen was a good knitter, a movie watcher (action/adventure, Marvel Cinematic Universe, and lots of 'anime'), and a devoted Pokemon player. She loved attending the annual late-summer bonfire party at a friend's rural place, reconnecting with many close friends from high school. She enjoyed oriental food, especially 'pot-stickers'. Gretchen's favorite color was deep purple. She had planned to adopt a cat. She'd been on several cruises, and often said if she won a lottery the first thing to do would be a round-the world cruise.

Gretchen was very much enjoying her condo, making it 'her own', and had a very nice bunch of neighbors. She also loved her hybrid car and enjoyed driving it around Mpls / St Paul. She was building a life, and we wish we'd seen more of it before God called her home.

She is survived by her parents, David and Susan Windschitl; long-time friend Karl Heil; many other relatives and friends.

She had planned to adopt a cat; as a memorial to her love of animals, we request donations to the Minnesota Zoo or to the wildlife fund or animal shelter of your choice.