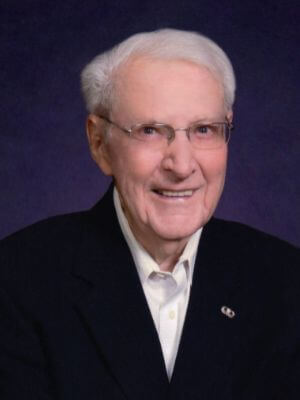 Harold “Hal” Roed
Harold grew up in Detroit, MI to parents, Gerhard and Julia Roed, first-generation Norwegian-Americans. He graduated in 1943 from the Henry Ford Trade School. In early 1944, after completing his final high school credits, he immediately joined the Army. He served proudly as a paratrooper and was stationed in France through the end of WWII.
Upon his return to civilian life, Harold attended St. Olaf College, married his love, Mary Skogen, and completed his degree at Northrop School of Aeronautical Engineering in CA. Hal eventually stepped into the new field of standards engineering. His career included work at McDonnell Aircraft, Honeywell Aero, Univac, Graco, Medtronic, and Control Data.

Harold and Mary settled in Richfield, MN to raise their family. Hal was a charter member of House of Prayer Lutheran Church. He cherished his Norwegian heritage, family and friends. His passions included golf, flying, and the Army Airborne-but most of all- great relationships built through conversation and story-telling. Hal was a founder of the Midwest All-Airborne Alliance, and instrumental in the creation of the Ft. Snelling Cemetery Airborne Circle, the only memorial in the U.S. dedicated to elite paratroopers and glidermen.

He is preceded in death by his parents; brothers, Cameron and Eugene; and his beloved Mary. He is survived by his 4 daughters, Signe (Doug) Pagel, Karen (Chuck) Roed-Rick, Joan (Dave) Oswald, and Cheryl (Dennis) Bernhardt; 6 grandchildren; 13 great-grandchildren; and numerous bonus family members.