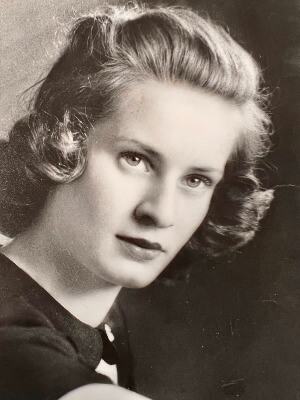 She was preceded in her journey to heaven by husband Stanley Johnson, parents Florian and Marie Kassin, brothers Michael, Frank, Jack, John, and Herb, and sister Mary.

Helen grew up in Minneapolis’ Longfellow and Seward neighborhoods. She attended St. Albert’s Catholic Grade School and graduated from Minneapolis South High School in 1941. She and Stan Johnson met at the Riverside Park ice skating rink in 1939, and they were married in 1941. Traveling cross country in a Ford Model ‘A’, they began married life in Santa Monica, California. They returned to Minnesota in 1942 and welcomed their first child, Patty. Four more children followed: Kathy in 1945, Jerry in 1949, Jim in 1951, and Shelley in 1960. Over the years, the family would welcome six grandchildren, 12 great grandchildren, and 10 great-great grandchildren. Nothing made Helen happier than holding one of those newborns.

The family lived in Minneapolis and Richfield in the early years, eventually settling in Bloomington. Stan passed in 2008, and after 54 years in their last Bloomington house, Helen moved to an Eagan senior apartment complex in 2010. She lived there independently until transitioning to hospice in May this year.

While raising her family, Helen also worked as bookkeeper and secretary for husband Stan’s business. In addition, she worked as a restaurant server from the mid 1970s until she retired in 1997.

She organized and cooked for countless large family gatherings, holidays, and events over the decades. Her recipes, in particular her “famous” thanksgiving dressing, set a high standard for comfort food that most family agree can’t be beat.

She loved to read books and often told the story of learning to write her name in cursive when she was just seven years old, allowing her to get her first library card. She continued to read daily, even through her last couple years when failing eyesight required magnification and use of a bright flashlight to see the words on a page.

She loved country music and was always up for a good party. Her repertoire of all-occasion quips (“Have you got mice in your pockets?”) was seemingly endless. She and Stan enjoyed numerous camping trips and cross-country RV travels over the years, often returning in winters to Texas and Florida.

She’ll be remembered for her devotion to family, sharp mind, love of a good time, capacity for hard work and perseverance, and resilient spirit.

Her family takes solace in the many good memories and celebration of her life, long and well lived. Irreplaceable, she will always be most beloved and deeply missed.