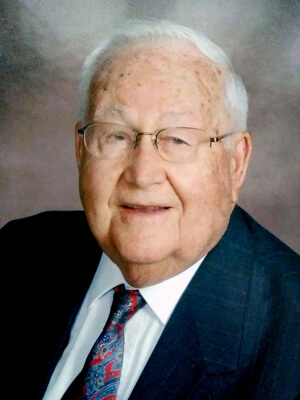 James Andrew Halvorsen, age 94, formerly of Edina, MN passed away unexpectedly on Monday, August 24, 2020 at Nine Mile Creek Senior Living in Bloomington, MN James was born February 5, 1926 to Rev. M. Lyle Halvorsen and Cora Christianson Halvorsen. He grew up in St. Louis Park, MN the youngest of 6 children. The family also spent considerable time at the family cabin in Amery, WI. He graduated from St. Louis Park HS then served as an electrician's mate in the Navy in WWII. After his discharge in 1946 he attended the University of Minnesota. On September 17, 1948, James married Patricia Lorraine Haling. They made their home in Edina where they raised three children. James worked for The St. Paul Companies, retiring as an IT manager. He enjoyed many hobbies and especially time with family. He was very involved in his church and the events of his children and grandchildren. Summers were often spent at the lake cabin, a favorite spot for many generations of the Halvorsen family. He was preceded in death by his parents; sisters, Lillian and Wenonah and brothers, Harold, Milton and Stephen and his son, Bruce. He is survived by his wife, Patricia; daughters, Christine (Bruce) Eldridge and Paula (Douglas) Olson; grandchildren, Drew Eldridge, Daniel (Stephanie) Halvorsen, Laura Halvorsen (Douglas English), Timothy (Jessica) Eldridge, Nissa (Ted) Dehn and Nathan Halvorsen; great-grandchildren, Carson, Chloe, Peyton, Ellie, Aubrey, Lilian, Sophia, Sebastian, Zoe, Gunnar, Adeline, Maxim and Franklin.