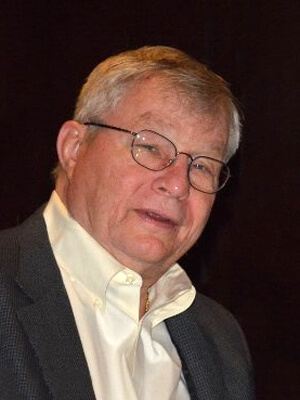 James Joseph Mock, Minneapolis, MN, passed away on May 6, 2020, after a 10-year struggle with Parkinson’s disease.

Jim was born February 15, 1943, to Vincent and Marina Mock in Geneseo, Illinois. He graduated from Geneseo High School and attended Monmouth College, in Monmouth Illinois. An accomplished athlete and student/leader, Jim was captain and quarterback of the football team, President and proud member of the fraternity Sigma Phi Epsilon. He and his fraternity brothers reunited every other year for the past 25 years. While at Monmouth, Jim met Sharon Wehrs and they were married on December 17, 1967. After earning a Ph.D. in agronomy and plant science from Iowa State University in 1970, he remained there as a faculty member for 8 years. In 1978, he accepted the position of Director of Research at Northrop King Seed Company and the family moved to Northfield, MN.

Northfield was their home for over 15 years, and Jim volunteered his time as a member of the Sertoma Club and other civic organizations. Most important, he was a dedicated advocate and fan of athletics in Northfield, never missing an opportunity to cheer his children on in soccer, hockey, figure skating, tennis, baseball, and softball. He never missed a match or game!

In 1993, Jim and Sharon relocated to Wichita, Kansas where he worked as President of Hybritech Wheat Company, a conglomerate of Monsanto Corporation. Jim eventually started his own company, Crop Verify, LLC, before officially retiring in 2004. While in Wichita, he was founder and served as Board Chair of the Agri-Business Council of Wichita from 2005-2014. In addition, he was a life-long member of the American Society for Agronomy.

Jim’s greatest joy during his retirement was spending time with his five grandsons. They loved fishing with him at the lake, playing Mexican Train Dominoes, solving the daily crossword, and watching sports with him. In recent years, after moving back to Minneapolis, Jim was able to attend soccer games and special school events.

A celebration of Jim’s life will be held in the fall of 2020.