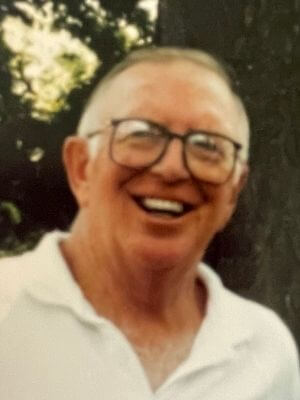 Passed away on April 25th, two weeks after his 101st birthday. He was born on April 13,1921 in Faribault, Minn., and was preceded in death by his parents, Joseph and Elizabeth Trench, his wife, Carol, and his brother, Robert Trench. Jim was married for 62 years to Carol Coan Trench. He is survived by children Terri (Mike) Miniutti, Mike (Cheri) Trench and Bob (Michelle) Trench; grandchildren Tom, Jon, Alexandra, Ronan and Garrett; and great-grandchildren Haley, Hannah and Luna. Jim graduated from Northfield High School in 1939, enlisted in the U.S. Army in 1941 and served in the South Pacific during World War II. He graduated from the University of Minnesota (where he was president of his fraternity, Alpha Tau Omega) in 1948. After studying at Minneapolis College of Law, Jim had a lengthy career as an attorney in both private practice and as a Hennepin County public defender, where he was notably recognized as an expert in selecting jurors. He represented the Metropolitan Mosquito Control District for 40 years, managing many legal issues and patents. He was a special assistant to the Minnesota Attorney General and was admitted to the Bar of the U.S. Supreme Court. A devoted Democrat, Jim worked on campaigns for JFK, Hubert Humphrey and Walter Mondale, and was chairman of the Richfield Edina Bloomington DFL. He helped incorporate and was president of the West Richfield Little League and he was chairman of the Richfield Charter Commission. Jim agreed in fairness to all. He loved his wife, kids, baseball, golf and chocolate, in that order, and never missed his kids’ games.

A special thanks goes out to the wonderful and caring staff of M Health Fairview Ridges Hospital, 3rd floor.