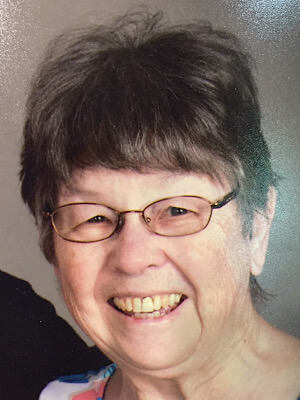 Joan Louise Christenson, age 79, of Roseville, passed away October 10, 2020. Even at the end of her battle with Alzheimer’s disease, she managed to produce the brightest and most beautiful smiles you have ever seen.

She was born January 6, 1941 in Minneapolis, MN. As a child, she lived in Chicago, Illinois and Dayton, Ohio. She graduated from Fairview High School, Dayton, OH with a 4.0 GPA. In 1962, she earned a Bachelor of Science Degree in Mathematics from the University of Wisconsin (Madison). As a math major, Joan was often the only woman in the classroom. She lived at the Frank Ellsworth House, a Queen Anne style rooming house that is now part of the Langdon Street Historic District. She served as a Memorial Union President and Usher and joined the Ski Club, the Senior Swingout Committee, and Sigma Epsilon Sigma. She was also a lifelong fan of Badger Hockey. After she graduated from college, Joan worked as a computer programmer at the Honeywell plant on Stinson Boulevard in Minneapolis, MN. She was the first woman promoted to an engineering grade in her department. During her time at Honeywell, she helped develop a star chart program for the Apollo astronauts.

After completing a major project, Joan asked co-worker Larry Wayne Christenson if he wanted to go out and celebrate her success. Larry said, “Yes” and they had their first date at the Lake Harriet band shell. Joan married Larry on May 11, 1963 at Mount Carmel Lutheran Church, Minneapolis, MN. In June 1964, she became a mother. Her focus shifted from star charts to baby carts. Larry sold his white Triumph TR3 to pay for a washing machine and dryer that laundered a steady stream of cloth diapers. As her family of three grew into a family of five, she collected and preserved her children’s report cards, drawings, and memorabilia in carefully labeled boxes. Over the years, she provided selfless support to her family. Between 1970 and 1975, Honeywell transferred Larry to the West Coast (San Diego, CA), the East Coast (Northborough, MA), and then back to the Midwest (Minneapolis, MN). On all three occasions, Joan accepted the hardships of moving (packing up and leaving behind friends and community) without hesitation because she viewed marriage as a selfless partnership.

Joan was equally devoted to her children. She blocked out one-on-one time with each child, allowing the child to plan the itinerary, which often included McDonald’s French fries. Joan organized a High School debate banquet complete with hand-sewn letters at a time when such acts were revolutionary. She sat in countless hockey arenas bundled up in stocking caps and Sorrell boots (her toes suffered frostbite during an ice skating date with a cute boy). When her daughter dreamed of becoming a veterinarian, Joan (who was not an animal person) courageously allowed white rats to live in her daughter’s bedroom (and later wrangled doves and pigeons at her daughter’s wedding and comforted the family dog in its final hours). Yet, somehow Joan still managed to study at Harvard Divinity School, roll out the most amazing piecrusts, bake cookies (her specialties were spritz and a round, chocolate-covered, peanut butter cookie nicknamed “chocolate meatball”), and play golf and tennis rather poorly with a laugh and a smile.

When her children no longer needed direct supervision, Joan returned to the workforce. As a person of exceptional integrity, high intelligence, and conscientious work ethic, she excelled as a Sanofi, software quality-assurance engineer, and a Boston Scientific, Food and Drug Administration (FDA) compliance officer. Since education was such a high value to Joan, she dedicated her earnings to the cost of sending her children to college. For more than 20 years, Joan and Larry spent weekends on their 31-foot sailboat in Wisconsin’s Apostle Islands. Although they encountered all kinds of weather, Joan really enjoyed the days of steady breeze under sunny, cloudless sky, which she called “blue-green” days because water and sky framed the forested islands perfectly. As empty nesters, they chartered sailboats in the Caribbean Islands. They also traveled to Norway, Denmark, Europe, Greece and Mexico.

Between trips, Joan devoted countless hours to her memoirs, which detail decades of life experience and personal reflections (a priceless gift for her children and granddaughters). She also spent hours researching her Norwegian ancestors. Joan listened to Joan Baez, Elvis (one of her mother’s favorite singers), and all kinds of classical music, except Bach (whose repetitive compositions she found quite displeasing).

Joan loved her six granddaughters. In expressing that love, she taught them how to make lefse and kransekage, invited them to Scandinavian heritage events at Minnehaha Falls and Mindekirken, and included them in her Sons of Norway activities. When Joan and Larry volunteered for school pickup, she would hand her granddaughters baggies filled with Nilla wafers for immediate consumption in their perfectly clean car. Joan and Larry brought the granddaughters to plays at the Stages Theatre Company and at the end of each play, Joan patiently stood next to them as they waited to greet the cast members who were signing programs. When the movie Ratatouille frightened one of the granddaughters, Joan sat with her in the theatre lobby until the movie ended. Over the years, Joan braved frigid weather to see her granddaughter ski by for two seconds, attended math competitions, concert band and jazz concerts, softball games, choir performances, marching band shows, and tennis matches, and shared the excitement of educational opportunities like the exhibit of the Dead Sea Scrolls at the Science Museum of Minnesota. Joan also sought and accepted the advice of one of her granddaughters when drafting the reading parts for the annual Christmas program. She always expressed confidence in her granddaughters, allowing them to place the large and unwieldy cookies trays in the oven (sparking a life-long love of baking). Joan continues to inspire her granddaughters as they reflect on her pioneering path through a male dominated career, her steadfast commitment to stand up for what one believes, and her expression of love, devotion, and confidence in each of them.

Due to COVID-19, a private service will be held with interment at Grandview Park Cemetery, Hopkins, MN. A Celebration of life will be held at a later date.

A livestream of the private service on Saturday will begin at 12:30 PM (and later view a recording of the service). See link below.

Memorials are preferred to Alzheimer’s Foundation or charity of the donor’s choice.