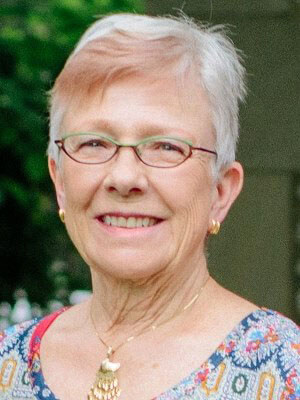 JoAnne Elizabeth (Jo) Dunstan of Bloomington, Minnesota passed away peacefully with family at her side on Sunday, November 29, 2020, at 1:40 pm after a three-month courageous battle with a rare, aggressive cancerous sarcoma. She had been at NC Little Memorial Hospice since Nov. 1.
Jo was born May 2, 1944 in Cedar Rapids, Iowa to parents Robert James Hunnicutt and Sarah Elizabeth (Focht). Preceded in death by son Steven Michael; brother James Hunnicutt; parents, Bob & Betty Hunnicutt. Survived by husband, John E; son, Paul (Kirsten) Dunstan; grandson, Brendan Maxwell (Max) Dunstan; daughter-in-law, Wendy Flanagan. Also, nephews William and Michael Hunnicutt and sister-in-law Molly Bennett. Jo was also thrilled to have recently connected with her Venezuelan cousins, Nancy, Jacqueline, Roberto and Jose.
Jo grew up in Sioux Falls, South Dakota where she graduated from Washington High School. She went on to graduate from Drake University as her family relocated to Mason City, Iowa. Jo met John when they were in the wedding party of Jo’s cousin and married a year later on June 18, 1966 in Mason City. After getting married, they moved to the St. Louis, Missouri area where Jo taught high school French and Spanish and was the advisor to the pompom squad. John was drafted into the Army and eventually stationed in White Sands Missile Range, New Mexico where Jo joined him and their first son Paul was born in 1969. The family moved back to the St. Louis area where Steve was born in 1971. Jo was thrilled when John was offered a job at 3M and they could move back to a four-season climate where the boys could be ice skating as much as walking. She was a die-hard hockey Mom who enjoyed watching the boys play hockey near and far. Jo was a dedicated stay-at-home mom who found great joy in raising their two boys. Although Jo spent a lifetime serving others, her greatest passion and success was raising Paul and Steve to become fine young men.
Jo was happy that she could continue her calling as the boys became school ages at Intermediate District 287 where she worked as a substitute teacher until her retirement. Jo immediately took to working with special needs children of all ages and would become a highly sought-after sub through the years (including her daughter-in-law’s classroom). Through her work at District 287 she served on advisory committees. As she approached retirement age, Jo was still in high demand but allowed her license to expire so she could retire in 2009.
Jo found a lifelong passion in her membership in PEO, both socially and altruistically becoming a member in 1969 in St Louis, MO and continuing her membership in the Minnesota Chapter L. Jo served her chapter on various committees and offices including president and delegate to state and national conventions. She enjoyed interviewing women for PEO scholarships as well as continuing her life-long love of learning that PEO fosters.
In recent years Jo had become an active member of the Twin Cities Opera Guild promoting opera and raising funds for music education as well as completing her Lay Care Ministry training at Christ Presbyterian Church where she could serve the community through senior visitations.
Jo was always physically active by swimming as often as she could whether it be outside at her townhome pool or at the YMCA. She ate very well and encouraged those around her to eat more vegetables. Always being the social butterfly, when COVID-19 shutdown her swim groups they would still meet at the YMCA parking lot for socializing and exercising at a distance.
Sadly, she began feeling sick in late August and it was discovered that cancer had set in. During the early days in hospice Jo, John, Paul and Pastor Jody Phenow of CPC planned a traditional church memorial service. At this time, we have decided to wait to hold a service at Christ Presbyterian Church. The date to be determined and will be posted at this website, and the Minneapolis Star Tribune and on Caring Bridge at https://www.caringbridge.org/visit/jodunstan.
The family plans to hold a celebration of life event at a date when we can all gather safely and joyously to remember our Jo.