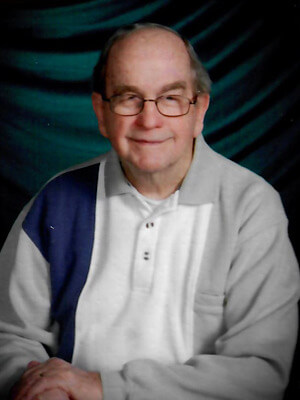 John F. "Johnny" Daffer, passed away peacefully on 3/4/21. John was born to William and Nellie on 11/18/25 in Fairmont, MN, where he spent his childhood. Later, the family moved to Mpls. John was President of his South HS senior class in June of 1943. In July, at age 17, he joined the Navy and served 4 years, finishing his tour of duty aboard the USS Antietam as an arresting gear technician during WWII. Upon his honorable discharge, he returned home to marry his red-headed HS sweetheart, Shirley Kovar. John went on to attend Dunwoody Institute graduating in the sheet metal trade and becoming a class A journeyman. Later, John attended college at the U of M earning a Bachelor's degree in education, becoming an Industrial Arts teacher. John furthered his education and received his Master's degree in guidance counseling. John spent the majority of his career as a HS guidance counselor in Bloomington, MN. In 1985, John and Shirley established "the Daffer Marionettes", performing as professional puppeteers. For 15 years they delighted audiences young and old at venues throughout the Twin Cities. Lifelong, John was involved in community groups, acting, singing and dancing with Shirley by his side. Cheers! Well Done! Good Show! John is survived by Shirley, his beloved wife of 73 years and cherished children; sons, Steve and Tom, daughters Rene Daffer Malmberg, Marlie Daffer-Nelson (Jeff), Cheryl Rynerson (Brad), 9 grandchildren, 12 great-grandchildren, and many nieces, nephews and friends. A kind, sweet, funny, charming, loving man, with a gift of bringing a sparkle to any occasion. John was a man of deep faith who enjoyed life and brought an abundance of joy to all who were blessed to have known him.

Private family Services have been held.

Memorials can be made in John's name to Hope Presbyterian Church, Richfield, MN; The Animal Humane Society of Golden Valley, MN; or the charity of donor's choice.