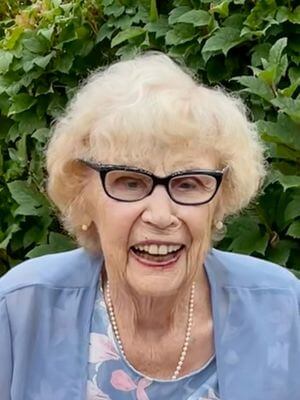 Lois was born to Clarice and Carl Swenson at home on their farm outside of Hoffman, Minnesota. She was baptized, confirmed and also got married at the Bethel Church in Hoffman. She attended country school for her primary years and then went to Hoffman High School where she graduated as valedictorian of her class. She began her college career at Gustavus College and then transferred to the University of Minnesota to get her advanced degree in nursing. Her specialty was in OB/GYN where she worked as the head of the department at Fairview Southdale Hospital. A favorite story that Lois liked to tell was how she and Don met, they had met in a bar, and that it was so crazy because she never did that sort of thing. They had each been there individually with a friend, and their friends immediately hit it off, so Don and Lois were paired together by default. She couldn't imagine that it would work out because he was just a city boy she met in a bar. After Lois was introduced to his parents she knew that they shared the same kind of upbringing and values. The duo was married for 60 years. Don and Lois loved to travel and they went all over Europe in a VW beetle shortly after getting married.

They loved camping; starting out with a tent, then later upgraded to a pop up trailer and then, when they retired, bought an RV and hit the road. They eventually made it to all 50 states, Canada, Mexico, the Caribbean, Western Europe and a little foray into Eastern Europe (not all of these trips were in the camper!). Lois loved to play cards, especially bridge. She adored music and singing, and was a performer with Silver Notes for about twenty years. An excellent seamstress, she created prom dresses for Laura as well as her and Laura’s wedding dresses. Laura and Maria, her daughters (then later Lois’ granddaughters), had the best dressed dolls of all their friends. She loved cross country skiing and most winter weekends Lois and her family would ski with her brother Courtland's family and then go to one of their houses for dinner and the adults would play bridge. Many weekends were spent at the farm where she grew up (her brother, Courtland, and his wife retired there). In the summer they would play croquet, every spring the family would 'maybasket' at a neighboring farm. She enjoyed the Harvest Festival in August, and over MEA, Lois and her family would make potato sausage and lefse.

Lois was a great cook and Laura didn't even know there was such a thing as boxed mac & cheese until she went to college! Dinner rolls were her specialty and her whole family would turn up their noses at the mere mention of store bought pies. She was a supportive and loving mother and grandmother, and at least two of Laura’s friends would happily trade their moms in for hers. She always made Laura feel confident that she could do anything she set out to do.

She is preceded in death by her husband, Donald Gantriis; daughter, Maria Rifley; parents, Clarice and Carl Swenson; and siblings, Courtland Swenson and Audrey Anderson.

Wear your best blue; let's fill the church with her favorite color.