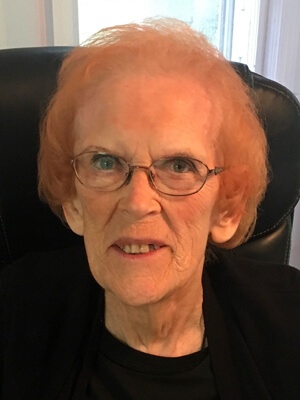 Marian A. Woolery, age 91, of Richfield, was welcomed into heaven with open arms on March 6th.
Marian was born to William and Emma Hallquist of Minneapolis on August 13th, 1928. She had 3 older brothers Carl, Bob and Harry. Including Marian, they were all 7 years apart; her mother always said it was very poor planning! When Marian was 12 years old, she got her first job at Miller Ballpark selling beer. She lied about her age and they believed her because of how tall she was. After Marian finished school she worked as a waitress and a telephone operator before marrying Tony Timmer. During Tony's time in the Air Force, Marian was able to live in France, Germany and Heraklion, Crete, Greece. This is where they adopted their first child, Jody in 1958. In 1962 Marian and Tony were transferred to Orlando, FL where they adopted their second child, Joe in 1962. In 1964, Marian moved back to Minneapolis with Jody and Joe. It was shortly thereafter that she and Tony separated. In 1975 Marian married her longtime friend, Ray Woolery. When Ray retired in 1977, they moved north and settled into their cabin on Thunder Lake. Every winter they would pack up their motor home and travel south. They spent many warm winters together soaking up the sun. Marian and Ray were on the go up until Ray passed away in 1998. After this Marian decided to stay close to her children and grandchildren, so she moved back home and joined her daughter Jody and son-in-law, Chris. Her mother-in-law suite allowed her to be close to all of her family and friends, and gave her the opportunity to party with everyone.
Marian is survived by daughter, Jody (Chris) Sunne; grandchildren, Heidi (John Caliendo), Kyle (Megan Briggs), Karsta (Julien Marck); son, Joe (Sue) Timmer; grandchildren, Nichole, Brent (Laura) Gates, Courtney, Kalley, Eric, and Jake; great friend and daughter-in-law, Margaret Woolery; grandchildren, Colleen, Kirsten and Carrie; 10 great-grandchildren; 3 great-great-grandchildren; and many wonderful friends! Preceded in death by infant son, Billy Timmer; husband, Ray Woolery; parents, William and Emma Hallquist; brothers and spouses, Carl (Gladys), Robert (Violette), and Harry (Charlotte).