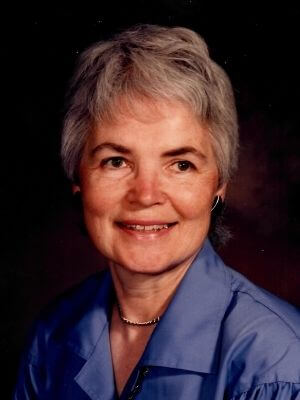 Marilyn Faye Thompson was born to Gerhard and Rachel Thompson at Vienna, South Dakota, on June 24, 1925. She moved with her family to Bryant, South Dakota, on her first birthday. Her brother Gerald was born in Bryant when she was five years old. In July of 1941, she moved with her family to Montevideo, Minnesota. She graduated from Montevideo High School in June of 1943 and attended St. Olaf College in Northfield, Minnesota, where she played clarinet in the college band and violin in the orchestra. She remained a student at St. Olaf through the middle of her junior year when, on March 23, 1946, she married her returning WWII serviceman, Robert Donald (Bob) Hanson, who had served in Europe as a P-38 fighter pilot with the 428th Fighter Squadron, 474th Fighter Group, of the Ninth Air Force. They made their home in the Twin Cities (Minnesota). Marilyn worked as a cost accountant while her husband studied for his degree in architecture at the U of MN. She later received her own BA degree from Metropolitan State University in St. Paul, MN.

Four children were born to this marriage: Scott Robert in 1951, Barbara Joan in 1953, Rebecca Lynn in 1955 and Gary Robert in 1959. During the children's school years, Marilyn was a "stay-at-home" mom who enjoyed being "school room mother," working with the PTA and serving on the community education board. The children's music lessons and participation in school bands, orchestras, choruses and theater productions were a top priority for Marilyn.

Marilyn taught Sunday school, choir school and confirmation classes and played violin in the orchestra at Westwood Lutheran Church in St. Louis Park, Minnesota, where she served on a pastoral call committee, was a circle member, an officer of the WLC Women, a member of the Cell Bible Study and a Westwood Lutheran Foundation Board member. She was the chairman for the 300 volunteers for the Minneapolis-held last national convention of the American Lutheran Church (ALC) before its merger into the ELCA.

Marilyn served three terms as a board director for the Ebenezer Society, a Minneapolis area nursing home complex, and was a president of the Ebenezer Auxiliary and a buyer for their gift shop. She was a volunteer at the nursing home for 25 years. She enjoyed working as a board director for the Minneapolis Ebenezer Towers, Ebenezer Park Apartments and the 7500 York Cooperative in Edina, Minnesota.

Marilyn served as a president of the Women's Architectural League of Minneapolis. She later managed the office for her husband's architectural firm, Matrix Architects, until her husband Bob's death from cancer on February 14, 1987.

In July of 1989, Marilyn sold her St. Louis Park home and moved to a high-rise condo in Seattle, WA, a short distance from her daughter Barbara's home.

On November 12, 1989, Marilyn married Gene G. Hickok of Camano Island, a fellow P-38 pilot comrade of Bob Hanson's from WWII days - both members of the 474th Fighter Group Association who had been meeting biannually for reunions since the first reunion in Minneapolis in 1975. In 1984, Bob and Marilyn and Gene and his wife Dot had been together for their Group's D-Day+40 journey to Normandy and other WWII locations in Europe. Dot too died. In 1994, Marilyn and Gene headed up the Group's D-Day+50 remembrance trip to the same areas in Europe.

After moving to Camano Island, Marilyn joined Camano Lutheran Church (CLC) and enjoyed the fellowship of the members of the CLC Women and the Martha Bible Study Circle. She chaired the CLC Evangelism Board, served on the CLC Property Board and was a member of a pastoral call committee. She also enjoyed the friendship of women in the Stanwood/Camano branch of the AAUW, the Utsalady Ladies Aid, the Camano Island TOPS, the Camano Island Women's Republican Club and the local chapter of the Daughters of Norway. She has had a long interest in genealogy and has belonged to the Camwood Genealogical Workshop.

Private burial will be at Ft. Snelling National Cemetery at an earlier or later date.

***Masks to help protect all attendees from COVID-19 spread will be required inside Westwood Lutheran Church.***

Visitation 1 hour prior to service

Click the link to view the livestream of Marilyn's Memorial Service.