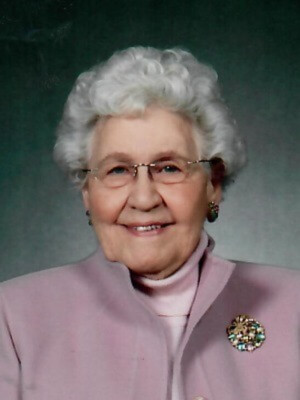 Born October 29, 1919 in Fairfax MN. to Frank and Octave Lauwagie, Belgian immigrants, who preceded her in death as did her husband of 54 years, Joseph; sisters, Alice Stippel, Rose Schwab, Agnes Schiltz; and brothers Harland, Harry, and Stanley Lauwagie.

After graduating from high school and business school, Mary worked at Gamble-Skogmo until her marriage to Joseph Ryan of Emmetsburg, IA, Oct. 29, 1941. They resided in IA following their marriage. Shortly thereafter Joseph was called to military duty.

A daughter, Mary Joe, was born in 1942. Mary worked as a secretary in the Palo Alto County Rationing Office for three of the war years. After the war, a son, John, was born in 1946.

Several years later the family moved to Omaha, NE for a short term. Mary worked at strategic air command then transferred to Minneapolis, where both Joseph and Mary were offered government jobs. Mary worked as an executive secretary with the Air Force CAP for 30 plus years and retired in 1982. Both Mary and Joe divided time at their MPLS homes and lake cottage in Ottertail County.

She was an avid bridge player and traveled extensively, widely known for her pleasing personality and generosity.