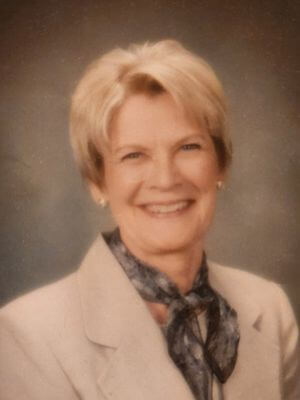 Mickey was born October 1, 1927 to Alfred Matzke and Frances Anderson Matzke. She is preceded in death by her parents and her husband, Harry, and is survived by her son, Ronald Monsen (Deborah), her daughter, Margaret Lyman (Casey) and her grandson, Ryan Monsen. Her name and nickname were given to Mickey in honor of a friend. She grew up in Waseca, Minnesota, and had a life in a loving family including the Anderson grandparents on a farm. Mickey took piano lessons, was active in Girl Scouts, Grace Lutheran Church, played trombone in the high school band, worked at the Birds’ Eye plant in the summers and enjoyed life in Waseca with Clear Lake for swimming, fishing and skating.

After high school graduation Mickey went to St. Olaf College in the fall of 1945 just after the end of WWII. While majoring in biology, she met a student from Trondheim, Norway, Harry Monsen. They married in 1950 and moved to Chicago, Illinois, where Harry completed his PhD and then taught anatomy at the University of Illinois College of Medicine. Mickey worked in research in the biochemistry department, She stayed home to be mother to two children and substitute teach in the high school. After the children left home she returned to the College of Medicine and worked in research in the pharmacology department.

Their children, Ronald and Margaret, became engineers. The family made several trips to Norway to visit Harry’s family and travel there. After 43 years of marriage, Harry died. Mickey reconnected with her St. Olaf roommate, Betty Andersen Stromseth and the two made trips to many and various parts of the world through the years.

In retirement Mickey became active in Friends of Lutheran World Relief, an organization which she helped streamline. The board of Lutheran World Relief gave her their annual “Friend of LWR” in 2010. She was also helpful in St. Olaf Alumni work in the Chicago area, and became a member of the Alumni Board from 2008-2012. It was a joy to be on the Northfield campus and in Minnesota again. So, she moved to Minneapolis in 2010, into an apartment at a senior cooperative, Becketwood. A lively social life there was enhanced by her work with the excursion committee.

Also her brother, Alan Matzke, and his wife, Annbolette, and their children made a busy and fulfilling time. She remained active and involved to the end.