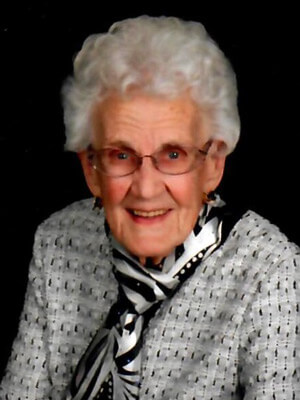 Neomie Lillian (Moen) Reishus was born on February 26, 1923 in Kidder, South Dakota to Elmer and Carrie Moen. She had four siblings, Ethel (who died in infancy), Edna, Joe, and Lindy. After attending school in Kidder and teacher's college in Aberdeen, she returned to Kidder to teach in the country school for five years. Following WWII, Neomie moved to Minneapolis, where she met and married Irving Reishus. They became proud parents to four children, Linda, Colleen, Terry, and Rick. In 1960 they bought a home in Bloomington, where Neomie lived for the rest of her life. Neomie enjoyed her job as a school secretary in the Bloomington Public Schools for 22 years. She was also an active member of Woodlake Church. She enjoyed traveling with church groups and family, playing bridge, knitting, and watching Jeopardy and the Minnesota Twins. Above all, she loved her family. She delighted in gathering with her siblings, children, grandchildren, and great-grandchildren. After 98 joy-filled years, she passed into eternal life on October 24, 2021.
Neomie was preceded in death by her loving husband Irv, her parents Elmer and Carrie Moen, siblings Ethel, Edna (Jerome) Hatlestad, Joseph (Martha) Moen, and Lindy (Vel and Donna) Moen, and son-in-law Jim Robinson. She is survived by her children: Linda Stockwell, Colleen Robinson, Terry (Deb) Reishus, and Richard (Cindy) Reishus; grandchildren: Kelly, Joel, Jaime, Lindsey, Megan, Jenna, Rachel, and Valerie; and great-grandchildren: Ian, George, Charles, Kobie, Parker, Benjamin, Aaron, Tiffany, and Hannah. Service will be live-streamed at YouTube.com/WoodlakeLutheranChurch, beginning 10 minutes before service

Face masks are required inside the church.