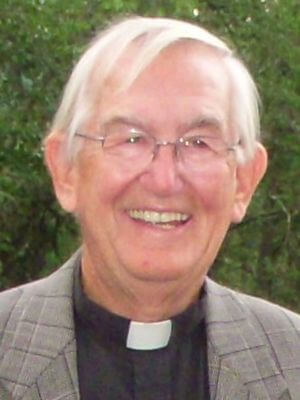 Rev. Gerald (Jerry) W. Nelson dedicated his life to his family and his work in the church. Jerry was born in Hinckley, MN to the late Bernard and Bernice Nelson. He grew up in Hinckley until his family moved to Cloquet, MN when he was beginning the 8th grade. To his good fortune the family purchased a farm directly across the road from a family that had 5 girls ... one of whom (Kay) would become the love of his life.

After graduation from Cloquet High School and Concordia College (Moorhead), MN) he enrolled at Augustana Seminary in Rock Island, IL. He spent a year's internship at Emanuel Lutheran Church in Hartford, CT. Jerry and Kay were married in Cloquet on August 19, 1960. He was ordained into the Lutheran ministry in Seattle, WA in 1961. As was the practice then in the Augustana Lutheran Church he was assigned his first call at Zion Lutheran, in Waterbury, CT. During this time, he was active in the civil rights movement in Selma, Alabama. Jerry and Kay lived in Waterbury from 1961-1966.

In 1966 Jerry accepted a call to Triumphant Cross Lutheran Church in St. Clair Shores, MI. In 1974 he accepted a call as Sr. Pastor of Our Saviour's Lutheran Church in Naperville, IL and served in that capacity until his retirement in 1997. Throughout his ministry his passion was for outreach and enabling people of all ages to grow in faith and service. In retirement he continued to lead seminars across the nation, sharing with pastors and congregational leaders through seminars entitled "Making it Work in the Parish."

Jerry served on the Committee of the Seven appointed by the Bishop of the ELCA to set future paths for the national church body. He also served as chairperson of Lutheran Social Services of Illinois and chairperson of Naperville Home for the Elderly (Martin Manor). He served as Pastor in Residence at the Lutheran School of Theology in Chicago, a wonderful month spent on campus teaching and counseling future pastors of the church.

Jerry and Kay retired to their lake home in Moose Lake, MN for the summer months and wintered in Surprise, AZ. He served for 15 years on the board of the Moose Lake Golf Club with 9 years as president. In Surprise he volunteered as a mentor and as outreach pastor for Lord of Life Lutheran Church.

He was preceded in death in 2019 by his beloved wife, Kay. He is survived by 3 children, Kevin Nelson and wife Karen of Edina, MN; Michael Nelson of Portland, OR and daughter Karla Cross and husband Tom of Apex, NC; 8 fantastic grandchildren, Erik, Kristen, Peter, Anders, Haana, Kristina, Sammy, and Kira and new great-grandson, Quinn.

Jerry was also preceded in death by brother, Leonard and survived by brother, Dean and sisters, Judy and Suzanne and many nieces, nephews, and cousins. Jerry was very grateful for the 'clan.' He felt he had the best wife and family in all the world and was always thankful for their love.