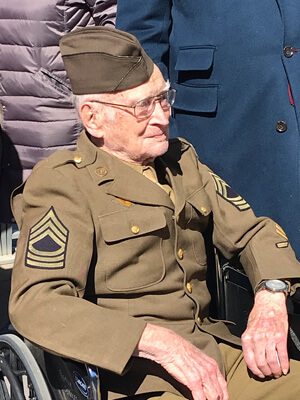 Age 103, of Richfield. Richard was born August 14, 1916 in Truman, Minnesota to Alex J. Bock and Marie L. (nee, Minor). He graduated from Concordia Junior College in St. Paul, Minnesota and Concordia Seminary in St. Louis, Missouri. He started his professional career teaching at a parochial school in St. Louis, Missouri. On January 6, 1942 he joined the US Army Air Force. He spent 3 years and 10 months serving his country, rising to the rank of Master Sergeant. Richard spent 3 of those years in the European Theater of Operations. On July 14, 1946 he married Alma R. Levik in Truman, Minnesota. In 1947 they became lifelong members of Mt. Zion Lutheran Church in Minneapolis. Over the course of their marriage they raised four children, Stephen, Peter, Mary and Catherine. For the next 32 years he worked in Manufacturing Management for Toro and Lindsey Water Softener. When he retired he became a handyman and never truly retired from that. He lived by the motto, "Work is a Blessing!" and it showed in all he did. He loved to spend his time camping - even camping into his 100's! Throughout life he served not only his family but his community. Richard became a member of the American Legion and the Veterans of Foreign Wars. He was a Sunday School Superintendent for 35 years, on the Board of Directors of Concordia Publishing House for 13 years, a Little League Manager for 10 years and a Boy Scout Leader for 10 years.