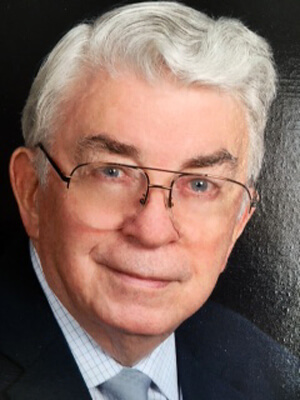 Bob Ulrich, age 91, beloved by family and friends from the Twin Cities and Chicago areas, died peacefully after a short illness. He was born and lived his early life in Cape Girardeau, Missouri, the eldest son of Sam and Esther Ulrich. His early grounding in Trinity Lutheran Church and School helped establish Bob’s lifelong priorities. Over the years, he cherished friends from Central High School in Cape, where they shared camaraderie and the love of singing. After high school, he was a student at SE Missouri State College and graduated with a degree in marketing from the University of Illinois, Urbana-Champaign. Bob enjoyed travel around the Mediterranean during his time in the Merchant Marines, after which he served three years in the Army, achieving the rank of second lieutenant.

Bob met Elsie Mae Ross "Mae" in Belvidere, Illinois when they were co-workers at a canning factory. Introduced by Mae’s sister, Majorie and her husband, J.W., Mae reluctantly agreed to one date. Needless to say, they soon fell in love, married, and shared life together for 49 years. Bob and Mae were parents to five children, and he often expressed his gratefulness to God for the blessings of family. Vacations always took them “home” to reunions in Missouri and Kentucky. Everywhere Bob and Mae lived, they joined faith communities where he served in numerous leadership positions, always singing bass in the choir. Friendship and laughter were cultivated with friends at dinner and over the bridge table. Politics and sports colored his interests throughout his life.

Interest in others and skill in the art of conversation enabled Bob to serve people in his professional life. His organization, attention to detail, and follow through were appreciated by those who benefited from his service. His work at the Bemis Company and Aid Association for Lutherans (Thrivent) gave him great satisfaction.

In 2013, he moved from Illinois to Richfield, Minnesota where he lived in the Main Street Village community, close to children, grandchildren, and great-grandchildren. Bob retained his love of singing and reached out to neighbors with friendship. His love for sweets and the Lord were well-known!