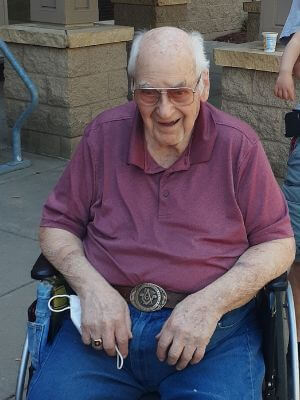 Robert Edwin Wood passed away July 6th, 2022, at the age of 91. He passed away at Cedars Rehabilitation Facility in St. Louis Park, MN.

Bob was born in Minneapolis to Edwin and Marvel Wood and graduated from Roosevelt High School. He spent time in Sheridan Wyoming as a ranch hand before joining the army the worked in the oil fields and meet his future wife in Terry Montana. After getting married in 1954 they settled down in Minneapolis where he briefly owned a gas station. Later Bob and Rose purchased a house in Richfield Minnesota and were blessed with a son and two daughters. Bob became a truck driver first hauling boats to Florida and changing to short hauls to be home with his family most nights. Shortly after his wife past he moved to The Pines Living Community and eventually to Minnehaha Senior Living.

We cherish the memories we have with our father and know he is smiling down on all of us.

A Masonic ceremony will take place prior to the start of the visitation at 9:30AM