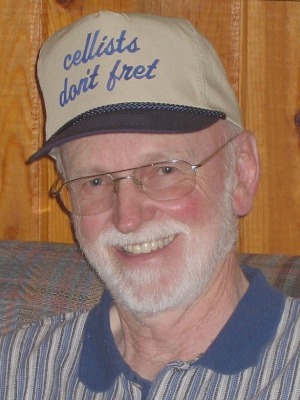 Russell Gundry Cox of Duluth, MN died on April 26, 2022 at age 85 at home in Apple Valley, MN. His final days were spent peacefully, surrounded by family and friends.

Russ was born in Duluth, MN in 1936 and he married Carol Korpi in 1957. He and Carol had their first child, Jeffry, in Minneapolis in 1958. Russ graduated with a BA in Electrical Engineering from U of MN in 1959. Russ’s work took his small family to Indiana (where Tom was born in 1961) and Ohio (where Diana was born in 1966) before they returned to Bloomington, MN where Jeni was born in 1968. Russ and Carol lived in Bloomington until 1990 when they moved to Eagan, MN. In 2015 they moved to Summerhill Cooperative in Apple Valley, where Carol still resides.

Russ was a life-long learner, teacher, and philanthropist, sharing his skills and steadfast support wherever he saw a need. He laughed often and loved deeply. His generosity, kindness, and caring spirit touched hundreds of lives and helped many prepare for the road ahead in the communities he worked with. Russ was proud of the 35-year Cox family tradition of heading up north to "the cabin" for a week full of family, extended family, friends, games, golf, and sundry adventures.

In 1960, Russ earned his first Master’s degree in Electrical Engineering from the University of Toledo, and then a second Masters in Telecommunications from St. Mary’s in 1996 when he was 60 years old!

Russ’s love of learning didn’t stop at academics. When his children were young Russ set up a woodworking shop in his basement where he built cabinets for the kitchen and taught his kids how to use woodworking tools. He taught himself how to do minor plumbing and electrical repairs and was always in the middle of one or more projects. When his kids were grown, Russ taught them to do many of their own home repairs — but also emphasized the value of hiring professional help for some of these tasks!

When he was younger, Russ was an avid tennis player. Later in life he became an avid golfer. He would argue that “avid” is not the same as “excellent” — but he enjoyed playing and shared his enthusiasm with others. The week before he died, Russ said “I am ready to go. I’m not sure what comes next, but I’m looking forward to my golf game improving…since it can’t get any worse!” He was cracking jokes right up to the end.

Russ was an early adopter of all kinds of technology. He was always interested in whatever the next new thing was, from the VCR and Atari gaming system to home computers, Palm Pilots, and tablets. He was one of the first people in his neighborhood to get dial-up internet and in 1989, Russ began working with the state of MN to develop its internet fiber network.

In his typically generous fashion, Russ shared all that he learned about technology with those around him. He was the chair of the Technology Committee at Summerhill and helped numerous neighbors troubleshoot and fix their technology issues. After he retired, Russ refurbished 786 computers and donated them to families in need through the Dignity Center and a social worker from the county's Community Action Program.

Russ loved music. He sang in the church choir and played in the church bell choir, and he and Carol regularly attended SPCO concerts. After he retired, Russ returned to playing cello, joining friends in a string trio, and playing as part of a duet with flautist Diane Bury from Summerhill.

In his quest to bring people together and enrich his community, Russ initiated a music appreciation program at Summerhill, and instigated the Saturday Movie Matinee where residents gather to watch old-time movies and munch popcorn — for the admission price of 12¢!

Besides supporting his neighbors and communities, Russ encouraged his kids in everything they did from high school band, choir, and theater, to their academic and professional careers. In the past few years he supported Diana’s serial entrepreneurship, Tom’s leadership roles with AuSM and the MPO, and Jeff’s research and engineering career and multiple geographic relocations.

In lieu of flowers, memorials may be given to the Sirtify Program Fund. (please specify “in Memory of Russ Cox”) at Normandale Community College Foundation or Portland Avenue United Methodist Church.

Family will greet friends one hour before the memorial service.