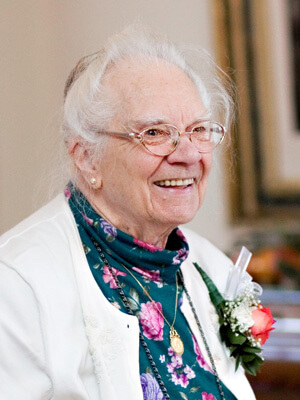 Ruth Evelina Holmer Friberg, age 101, of Minneapolis, MN, died at her home early Thursday morning, Dec. 17th, 2020. Plans for a memorial service at Trinity Lutheran of Minnehaha Falls, Minneapolis and the burial at the Swedlanda Lutheran parish; Hector, Minnesota have been delayed because of COVID restrictions.

Ruth was born on July 11th, 1919, near Rajahmundry, India; where her parents were Lutheran missionaries. With her brothers, she attended Kodaikanal boarding school until she was 12 years old. Because of the economic depression, her family returned to Pennsylvania in 1932; where Ruth completed High School. She earned a nursing degree from Johns Hopkins School of Nursing and a BS from Augustana College. In 1945 she joined the Augustana Lutheran mission in Tanganika, East Africa, where she served as a nurse at the remote Kiomboi Lutheran hospital. In 1947 she married Rev. H. Daniel Friberg, who had responsibilities with the mission in the Usambara district, about 500 miles away. Ruth practiced her nursing in various different settings, even as six children were added to their family. Dan and Ruth continued their mission service together for another 34 years at various locations in Tanzania. They retired in 1979 and made a new home in south Minneapolis, where they remained active at Trinity Lutheran Church of Minnehaha Falls and maintained contact with their many friends and extended family. After Daniel died in 2005, Ruth continued in her home, where visitors were always welcome. When dementia advanced during the final years, she was kept in her home through the care of her children and family friend, Tim Carlson. The Minnesota Hospice program also provided marvelous assistance.

Beyond primary commitments to her family, nursing and community of faith, Ruth pursued a wide variety of other interests, including: visiting with friends and neighbors, sharing letters, playing piano and listening to music, gardening, baking, bird watching, collecting stamps, reading novels, listening to BBC, watching ‘Jeopardy’, recording her diary, loving her cat, daily devotions and prayer.

Ruth was preceded in death by her husband, Daniel Friberg; her parents, Thure and Celia Holmer; and by her brothers, Eric (AnitaRae) Holmer, Edvin (Jenny) Holmer, Paul (Shirley) Holmer and Hilding Holmer.

Ruth’s family are thankful for the prayers and messages from the members of Trinity Lutheran of Minnehaha Falls, colleagues from the mission in Tanzania and many other neighbors and friends.