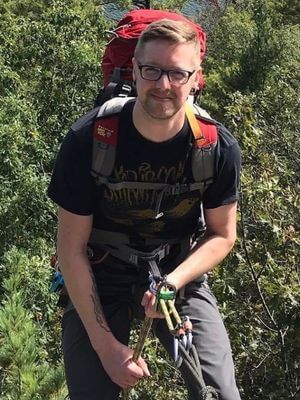 Sean died December 27, 2022 at the age of 42 at Abbott Northwestern Hospital following complications from an aggressive brain tumor.

Sean was born to Sharon and Joseph Lipinski on October 13, 1980, in Minneapolis, MN and grew up in Stillwater, MN, the eldest of five children. Sean was a devoted father to two beautiful daughters, a doting husband, and a loving son, sibling, and friend to many. Sean was a musician, a rock climber, a craft beer enthusiast, and collector of records and music gear.

Sean became a father on January 29, 2008, with the birth of his daughter Madeline. He gave the world a second daughter, Tabitha, on March 17, 2016. Sean was a proud dad who took his daughters on adventures in nature, including trips to Joshua Tree, Rocky Mountain National Park, Mount Hood National Forest, and Zion National Park. He encouraged both daughters to express themselves through music and art and loved them with everything he had.

Sean married Samantha Lipinski, née Meehl, on June 28, 2014. He and Samantha cherished ten beautiful years together, supporting each other and creating a warm home for their family.

Sean received his first guitar at the age of thirteen and fell in love with making music. Throughout his life, he played in bands including Holding On, The Real Enemy, Regret, Comeback Kid, and Sunset. He had the opportunity to tour with these bands across the United States and made friends everywhere he went.

Click here for the recorded link of the service on Friday, January 6.

In lieu of flowers, the family is requesting donations to their gofundme to support his daughters’ futures.

All family, friends and supports are welcome to attend this gathering.

Memorial Service is reserved for family and close friends. A large Celebration of Life will take place at a later date.