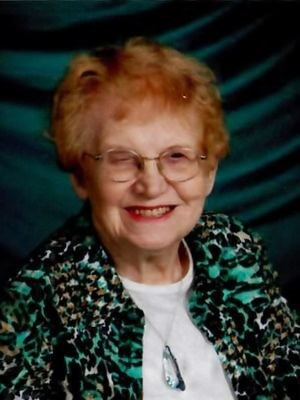 Age 96, of Richfield, passed away peacefully on 12/24/2022 – so fitting for a woman that radiated the Christmas Spirit. On her own, Shirley became a Christian at age 6 and thereafter joyfully and humbly followed Christ for 90 glorious years. Shirley was born to Emil and Verna Kovar on 7/27/26 in Mpls, MN. Voted “Best Personality” in her Roosevelt HS graduating class of 1944, she played timpani in the orchestra, excelled in commercial courses and was President of the Blue Triangle Service Club. Following graduation, while waiting for her HS sweetheart to return from WWII, she was employed by the U of M, at Northrop Hall as an executive secretary where she was able to apply her many exemplary skills for the Concerts and Lectures Dept. In 1947, upon his honorable discharge from the Navy, Shirley and John married and began their life together. They remained in Mpls., for many years, buying their first home and starting their family. Shirley continued her secretarial career part-time in area schools and churches while lovingly raising and supporting her 5 children in their activities. In 1985, upon John’s retirement, Shirley and John established the “Daffer Marionettes”. For 15 years, and over 800 shows, they delighted audiences young and old at venues throughout the Twin Cities. Bravo! Good Show! For many years, Shirley and John sang with the “Richfield Silver Notes Choir” and participated in community theatre. Shirley was a tap dancer in her youth, and then again in her senior years with the “Rhinestone Rockettes”, dancing into her 70s. Some girls are born with “glitter” in their veins. Shirley was a loving and devoted wife, mother and grandmother. Preceded in death by her beloved husband of 73 years, “Johnny”. She is survived by her children whom she cherished: sons, Steve and Tom; daughters, Rene Daffer Malmberg, Marlie Daffer-Nelson (Jeff), Cheryl Rynerson (Brad); 9 grandchildren, 13 great- grandchildren and many nieces, nephews and friends. She was always kind and generous, friendly, thoughtful and bubbly with a cheerful laugh. She also was a woman of deep faith, her studies and knowledge of the Bible respected by many. Shirley lived life with an abundance of joy and was a gift to all who were blessed to have known her.

The service will be livestreamed at www.hope-pc.org/live.