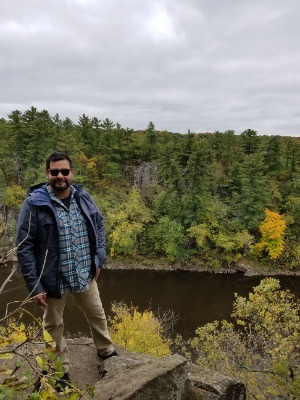 Silvester “Sonny” Guadiana, Jr. was born in San Antonio, Texas on December 14, 1977. He arrived with greatness in spirit, presence, and a purpose for making the world brighter and better.

He attracted attention early. People stopped his mother on the street to coo over the “cutest little boy”. He was cute, but stubborn. Did he use his good looks to get his way? Well, we are told a pre-kinder teacher who allowed him to wear PJs to school may confirm.

Jessica, his sister and partner-in-crime; from the day they met, it was shenanigans. Young brother Joel soon followed and the three of them became a team. Growing up, this team enjoyed going to the state parks in Texas, which may be why he fell in love with the outdoors of Minnesota and Hawaii. Never far apart in heart, throughout the years and miles, they always stayed in touch. Sonny enjoyed his long calls with both.

With his purposeful calling, he had to know a thing or two. No surprise to anyone, in elementary through high school he was enrolled in the gifted and talented programs. As a middle schooler, he and his close groups of friends made their own films with a home video camera, a hobby they continued through high school. He attended Health Careers High School in San Antonio, where he and his close friends discovered and connected around a love for music, fiction, movies and writing.

He attended the University of Texas, Austin and majored in English Literature and Mexican-American studies. He loved playing racquetball, watching films, and hanging out with his friends and kindred spirits, Philis, David, James and numerous others.

Armed with his four year degrees and an encyclopedic knowledge of The Beatles, he moved from Texas to Minnesota in 2002.
One of his first friends found in MN was Peder Karl Eric Swanson (aka, Peder), who became his second brother and forever friend. Sonny was Peder’s best man at his wedding to Drew Conway. He couldn’t have asked for a better buddy and buddy’s husband to join his super circle.

After two years of braving the Minnesota winters, however, he decided to return home to Texas. A fateful meeting at a friends’ apartment pool would change that trajectory. One day in August 2004, he met Carmi. They swam and did yoga poses. A few months later, they had a first date. Sonny decided to delay his move back and stay on a friend’s couch to “see how it goes”. They both knew something special was there.

Beers, biking, music, and new friends ensued, and Minneapolis was the playground.

Sonny worked at Co-op Partners Warehouse, an organic grocery distributor in St. Paul, serving seven states in the Midwest. In his eleven years at “CPW”, he learned everything produce related, excelled at shipping and distribution, and started and ran the Move-It program. Most importantly, he made many forever friends; several having an unbreakable bond.

It was clear Sonny and Carmi were not to leave one another's side. So, in July 2007, they bought their first home together in the Powderhorn Park neighborhood of Minneapolis. They moved in with Rudy-cat, who passed on and soon later adopted Mr. Black (doggo), Padma, and Siddhi (cats) who became the fur-kids.

In 2015 Sonny left CPW, and decided to take a break, return to Texas for a few months to reconnect with family and re-center. Family was always important to Sonny and hard to be away while loving MN. This was a time of healing. It also was the first time he and Carmi were apart for any length of time.

In 2016, Sonny decided on a job with a company that shared his values and where he could make Chemex all day and get paid for it. He became a barista at Peace Coffee, Capella Tower. When a Shipping & Receiving Coordinator job opened up at the roastery, it was providence. He told Carmi, “I can help them grow the company”, and he did. As Peace Coffee expanded, so did Sonny’s responsibilities. Recognized for his efforts and experience, he was promoted to Warehouse Supervisor role in 2019.

Meanwhile, in December 2017, Sonny, Carmi, Mr. Black and Siddhi moved to the new home near Richfield while still barely keeping one foot in Minneapolis to maintain organic compost services. Near Taft Park, Sonny worked on his yard when weather was good, fished, kayaked, and walked Mr. B around Taft or Veteran’s Park, and checked out every restaurant in a 2 mile radius; choosing Carbone’s and ie - italian eatery as the favorites.

He left his Earth story on June 1, 2021, to be continued elsewhere. We will always remember him and his larger than life presence and spirit.

We remember him singing, dancing, playing, wrestling, biking, stretching, breathing, teaching, holding, smiling, walking doggos, tending his yard, hanging in Fridley with “the boys”, loving Carmi, and most of all, loving everyone in his circle or his sphere. When he connected with you, it was with a heart of joy.

Sonny is survived by his partner Carmi Anderson, his mother and step-father Bea and Robert Aguirre, his father and step-mother Silvester and Rosie Guadiana, sister Jessica Peña, niece and nephews Jonathan, Dorian, Jayla, Finn and Oliver and numerous aunts, uncles, and cousins.

If you are unable to attend the service in-person, please click here for the live-stream link. Following the service, the link will change to a recorded link.

Contributions:
To honor the man with the biggest of hearts, his family asks that memorial donations made in Sonny’s name go to three causes he cared deeply for: racial & social justice, yoga, and independent music.

Community Gathering:
You are invited to Sonny’s Lake House (Peder & Drew’s home) following the service.
There will be more speaking opportunities there to share memories of Sonny.
6775 East River Road, Fridley, MN 55432