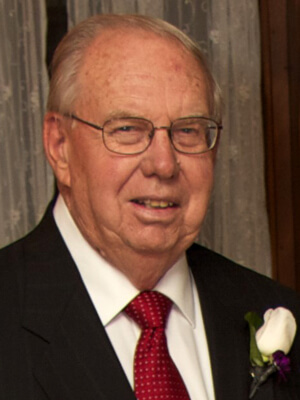 Thomas A. Thompson, "Tommy", age 94, of Minneapolis passed away on January 2, 2020. Preceded in death by his wife, LaVonne Thompson; granddaughter, Katelyn Gourley; parents, Allert and Anne Thompson and brother, Richard Thompson. Tommy was raised in Lakefield, MN where his father was a prominent businessman and civic leader. Growing up, he worked in his dad's clothing store, and was always in a suit. Tommy enjoyed camping with the Boy Scouts, along with hunting and fishing with family and friends. In high school, he participated in both band and football. He met his wife of 70 years when her family moved in across the street. They dated shortly before he joined the Navy at 17. He attended Midshipmen's school and was commissioned as an Ensign at Navy Pier in Chicago. He served as a repair officer in the Phillippines on the USS Proserpine (ARL-21). After WWII Tommy married LaVonne, settled in Minneapolis and attended the University of Minnesota. Upon graduation as a civil engineer, he began his career with the City of Minneapolis. Serving as a Traffic Engineer, City Engineer and City Coordinator. As the first City Coordinator, Tommy held the strongest executive position in the history of the city. He modernized the streets, highways and sewers, built Orchestra Hall, Peavey Plaza, Loring Park Greenway, IDS City Center, the downtown YMCA, skyways, two stadiums and countless parking facilities. Under Tommy's leadership, the city of Minneapolis was revolutionized, and became a role model for city development. His talents were eagerly sought; after 31 years of public service, he became Senior Vice President of Cowles Media, running 23 media companies outside of Minneapolis. He was responsible for real-estate development, government relations, and the affiliate divisions. His commitment to the community included membership and leadership with the Minneapolis Downtown Council, Metropolitan YMCA, Rotary International, Fox and Hounds, Masons, Cataract Lodge, Minneapolis Scottish Rite, Zuhrah Shriners, Sons of Norway, Richfield United Methodist Church, Nave Institute, and the Lake John Association. Beyond his career and community activism, family was the most important thing to Tommy. His professional resume held but a candle to his loving role as a father, husband, brother, and grandfather. He built a cabin on Lake John in Annandale, MN, where his hospitality and generosity could be felt by everyone who visited, whether it be his own family or his neighbors. Tommy had a charismatic nature and tenacity to him that countless people experienced, and none could forget. His storytelling and welcoming energy instilled awe, wonder, laughter, and wisdom. As a member of the Greatest Generation, he upheld that title by living his life through humility, adoration, and integrity.
His surviving family members include children Greg Thompson (Becky), Susan Kunelius (Don), Mary Ruhme (Paul), Patty Gourley (Kelley); grandchildren, Tom Thompson (Tiffany), Ted Thompson (Janice), Theresa Helms (Brian), Elizabeth Namyst (Jason), Sarah Nelson (Jonathan), Ben Ruhme, Jessica Larson (Brian), Michael Gourley, and twelve great-grandchildren.

Memorials may be given to Richfield United Methodist Church or the MN Arboretum.