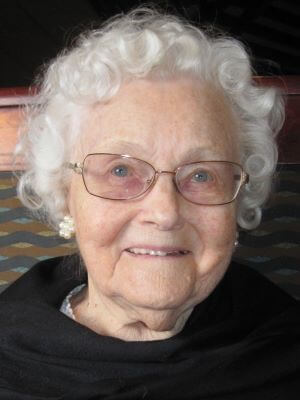 Vilma Tiit Strid, age 96 of Richfield passed away on January 18, 2021. She was born on April 18, 1924 to Priidik and Liisa Tiit in Pärnu, Estonia. In 1944, at the age of 20, Vilma left her beloved Estonia as the Russians were once again invading her country. She fled on a boat with her sister Maria Ollino’s family to Sweden. As a refugee, Vilma was relocated to Stigen, Sweden where she met Enar Strid. They were married in 1949 and immigrated to America in 1950. Vilma was an avid gardener and, as she put it, loved to have “a finger in the dirt”. She was accomplished at needle crafts of all kinds including knitting, crocheting, sewing, and embroidery. Vilma retired at the age of 65 after 20 years at JCPenney when she decided she wanted to learn to quilt. And she did, again expertly. She was an active member of Richfield Lutheran Church for many years as a Sunday school teacher, member of the church choir, and as part of the Naomi Circle. Vilma was also a long time volunteer at Richfield Community Center. She is preceded in death by her sister Maria Ollino, brother Elmar Tiit; and husband Enar Strid. She is survived by her children Virve Strid and Glenn Strid. Vilma will be deeply missed by her many friends, relatives, and her “other” daughters Jill, Astrid, and Taimi. Funeral service will be held at 2 PM on Friday, January 29 at Morris Nilsen Funeral Chapel, 6527 Portland Ave S. Visitation one hour prior. Interment Lakewood Cemetery immediately following.

Memorials preferred to an animal charity of the donor’s choosing or Richfield Lutheran Church.