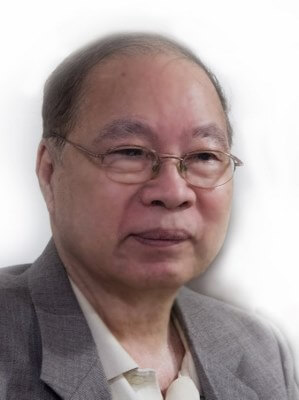 Nguyen Van Vy was born November 26, 1932, in Hai Duong, Viet Nam. His mother died when he was 12. As a youth, he studied at the French Polytechnic University in Ha Noi. Before he finished his studies, in 1954, when French rule of Indochina ended and Viet Nam was split into a communist north and democratic south, he migrated south aboard the US Navy ship Serpent. He settled first in Chau Doc, where he taught math, physics, and chemistry at Thu Khoa Nghia high school. Soon after this, he went to My Tho to teach in Nguyen Dinh Chieu high school and then moved to Saigon in 1955. He completed his schooling at University of Science, majoring in Physics and Chemistry. He also taught at various schools—Tran Luc Chu Van An, Trung Vuong, Cao Thang, Tao Dan, Khai Tri—before finally founding, with a group of friends, a private high school named Truong Son, where he introduced popular college prep courses in physics and chemistry. He continued at Truong Son until 1972, when he founded another private institution named Van Hoa that offered 6th to 12th-grade instruction and prep courses to help seniors surmount the rigorous national and college entrance exams. When Saigon fell in the spring of 1975, marking the consolidation of communist power in the country, he repeatedly sought ways to leave the country. After several unsuccessful attempts, in 1978 he escaped with his son by boat to Songkhla, a refugee camp in Thailand. From there, he was sponsored by his younger brother who was already living in the states, and he settled in Richfield, Minnesota. At the age of 46, he found himself faced with the task to rebuild his life starting from the bottom. He first studied computer technology at Brown Institute and got a job as a technician at ADC Telecommunications. While working as a technician to support himself and his family—including his wife and two daughters who were still in Viet Nam—he simultaneously studied electrical engineering at the University of Minnesota, getting a BSEE degree in 1983 and an MSEE in 1985. He was employed as an electrical engineer at General Dynamics in 1984 and continued at this firm until retirement in 2004. Challenged by various health problems, he died peacefully on March 12, 2020, at 5:30 pm. He is survived by his wife, Cham Nguyen; daughter, Ngoc Nguyen; son, Hung Nguyen; daughter-in-law, Van Nguyen; daughter, Nga Sheehan; son-in-law, Bernard Sheehan; grandchildren, Coleen Nguyen, Andrew Sheehan, Sophia Sheehan; sister, Hoan Nguyen; sister-in-law, Ut-hai Nguyen, along with other family & friends. Preceded in death by parents, Ha and Thuc Nguyen; brother, Ky Nguyen; brother, Canh Nguyen.