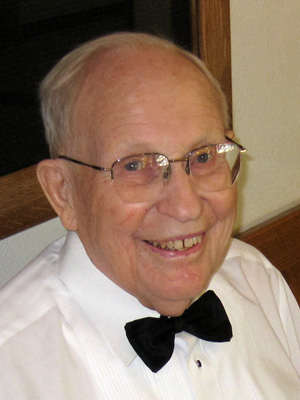 W. Blake English, Sr., age 100, of Minneapolis, MN, passed away peacefully on Friday, May 29, 2020, at the Minnesota Masonic Home in Bloomington, MN. He was born on August 8, 1919 to William and Hedvig (Johnson) English in Gwinner, ND. He graduated in 1941 with a business degree from the University of North Dakota in Grand Forks, ND. In April 1942, he entered the U. S. Army and served in World War II in India and the Philippines. He received the American Theater Service Medal, the Asiatic Pacific Theater Service Medal, and the Philippine Liberation Ribbon with the Bronze Star. He was discharged in December 1945. He began his business career in finance and accounting, first at Goodyear and then Honeywell in the Twin Cities. He eventually joined and then retired from the Minnesota State Highway Department in St. Paul, MN.
Blake was united in marriage to Kathryn Dahl on June 1, 1946 in Gwinner, ND. After Kay passed away in 1988, Blake married Eunice Davis at Woodlake Lutheran Church in Richfield, MN on December 30, 1990. He was a lifetime member of Woodlake Lutheran and served the church in many capacities. He was a member of the Masonic Lodge and had just recently received his 75 year pin. Faith and family were very important in his life.
He is survived by son, Blake English, Jr. (Cheryl); son-in-law Tom Crook (Oddbjorg Hjellbakk) step-son, Reginald "Bud" Davis, Jr. (Ruth);
step-daughters, Barbara Geertsema (Dr. James), and Nancy Wallick (Mark Mickelburg); grandchildren, Corey English (Charmaine), Kiley English, Hilary Crook (Jacob Seljan), Emily Crook (DJ Hamm); step-grandchildren, Jack Wallick, Katherine Wallick, Joel Davis (Heather); great-grandchildren, Boden Cossette, Oliver Cossette, Jackson English, JoHanna English, Britton Seljan,Lovisa Seljan, Marit Hamm, and many step-great-grandchildren.
Preceded in death by his parents; wives, Kathryn English and Eunice English; sister, Betty English and daughter, Nancy English.
He leaves behind many nieces and nephews, lodge brothers, and countless friends. He was a man of unwavering faith in Jesus Christ, Our Lord and Savior.