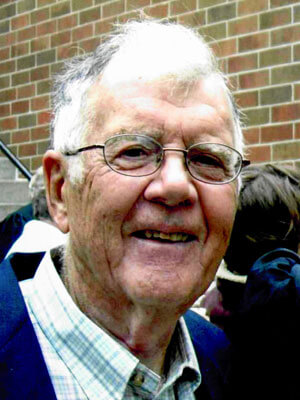 Willard Erwin Crosby was born March 8th, 1927 in Winnebago, Minnesota. When Willard was 13, his father, George, passed away leaving Willard and Willis with adult responsibilities at a young age. Wayne was just a toddler. As a result, Willard got his driver’s license at age thirteen and worked as a delivery boy for the local grocery store to help pay the bills.

Willard later attended Winnebago High School, playing tackle on the high school football team. That is where his love of football began and continued throughout his life, as he was an avid fan of the Minnesota Vikings and Minnesota Gopher football teams. He graduated high school in 1945 and joined the Army just as World War II was reaching its end. He served for 2 years and was sent to Italy to serve as a clerk-typist, which was a source of amusement for him since he did not know how to type. He had a secretary, though who did all of that for him.

After leaving the army, Willard came back home and attended college under the GI bill at Gustavus Adolphus in St. Peter, MN. After two years, he transferred to the University of Minnesota and earned his BS degree in pharmacy. In 1952 he began his career as a pharmacist at Walgreens where he worked his entire career until he retired in 1990. At Walgreens he also served twelve years as a store manager/pharmacist.

A short time after beginning his career at Walgreens, Willard met a lovely lady named Marjorie Buysse at Murray’s bar in downtown Minneapolis. They courted for about a year and were married October 8th, 1955. They were married over 65 years and had 3 children and 4 grandchildren.

Willard loved spending time outdoors, especially fishing. Every summer he was sure to take his family up to northern Minnesota on vacations to either Farm Island Lake or with his brothers to Williams Narrows for some fishing, swimming boating or waterskiing. After retirement Willard and Marge bought a cabin near Moose Lake, MN and spent many enjoyable long weekends there puttering and fixing things up as well as enjoying the lake from the comfort of their pontoon boat. They also looked forward to fishing, golfing or having family fun “Happy Hours,” featuring Grandpa’s famous “kanoopers” and abundant snacks. Traveling was also part of retirement life as well. They would spend one month each winter in Naples, FL to skip out on some of the Minnesota cold.

As much as Willard loved all of these things, what was really important to him was his family. He cherished all the moments he could spend with them and truly enjoyed the company of family and friends. He was a wonderful husband, father, and grandfather who always put others first. He took the time to instill in his children Christian values and upbringing, teaching them by living a life of love and service.

He was preceded in death by his parents, Anna and George Crosby and his brothers, Willis and Wayne Crosby. He is survived by his wife, Marjorie; son John (Jill), Crosby; daughters, Paula (John) Shivers and Janet Crosby; grandchildren, Nicole Bisco, Aaron ( Ashley) Crosby, Annie Crosby and Cassie (Reed) Clabaugh.

Memorials may be directed to Berea Lutheran Church.